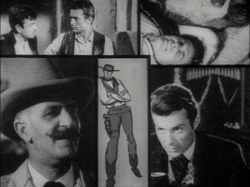 After someone fires explosive bullets at their train, West and Gordon travel south of the border to investigate a munitions expert named Thorwald Wolfe (Keenan Wynn), who's gathering guns for hire and trying to find an accomplice in the Mexican Army. West joins his outfit as the former and Gordon as the latter; together they attempt to free Captain Enrique Leon (Andre Philippe), a friend who is being held captive by the gang, and also put a stop to Wolfe's plans to conquer Baja California and eventually all of Latin America.