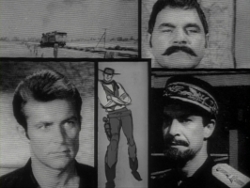 A senator's daughter breaking up with her fiancé is the first step in a chain which leads West and Gordon to a militant group planning to overthrow the United States government, led by the insane General Grimm (Martin Landau). West manages to join the group and starts to gain their trust by overcoming various tests which they put him through, but he is in constant danger of being recognized, events are beginning to move quickly, and somehow word has to get to the fort at Goldtown before things explode...