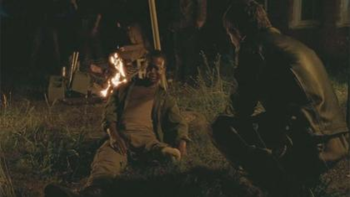 Rick's group heads away from the smoldering ruins of Terminus. They stop to rest for the night, and several of the group members talk with each other.

Tara talks with Rick about her reluctance to attack when the prison fell, while Tyreese tells Carol that they don't need to tell the group about Lizzie and Mika's deaths. Later, Rick thanks Carol again for saving their lives and she tells him that she learned to survive after being sent away.

The next morning, Daryl brings food for the group and says that he felt like they were being watched the night before. Bob and Sasha begin flirting with each other, but the moment is ruined when screams are heard in the distance. Carl asks his father and the others to save the person in distress.

The group runs towards the noise, and find a man on top of a rock trying to stay out of reach of a group of walkers. They dispatch the walkers and the man introduces himself as Father Gabriel, who's a priest. Although the group is wary of him, he tells them that he has a church and that he has never killed anyone.

Inside, Gabriel tells them that he's scavenged every location in the nearby area except for one that's overrun with walkers. Rick, Sasha, Bob and Michonne bring Gabriel with them for their scavenging mission, but not before Rick tells Carl that it's never truly safe, and not to trust Gabriel.

Gabriel leads Rick and the others towards the location, and Bob tells Rick that they need to head to Washington eventually. Elsewhere, Carol and Daryl find a derelict vehicle with a battery that still works, and Glenn, Tara and Maggie search a looted gunshop and find three silencers.

Rick and the others find the location with Gabriel, which is a food bank. Inside, they find out that the shelves of food are in a basement which has been partially flooded and filled with a dozen walkers. Together, the group clears out the walkers by using the shelves as makeshift barricades, and Rick saves Gabriel's life when he panics and tries to flee from an advancing walker. Bob is also pulled underwater by a walker, but Sasha manages to kill it.

They bring the supplies back to the church, and Michonne tells Rick how much she has gotten used to life after the apocalypse on the way back. Once there, Carl points out to Rick that someone was trying to break into the church and has scrawled the phrase "You'll burn for this" on the back wall.

That night, Abraham makes a toast to the group and implores them to get to Washington and cure the virus. Rick and the others agree, and get some rest for the night. Sasha leaves to take care of Judith, but a conflicted Bob asks her to give him another kiss before she leaves, and tries to hold onto her hand as long as possible. Rick also goes to Gabriel and says that he knows the latter is hiding something, and that if that something hurts the group in any way, Rick will kill him.

Outside, Daryl and Carol are clearing the area of walkers when they see a hearse drive by. Convinced that it's the same car and driver that abducted Beth, both of them jump into the car they found earlier and drive after it...

Bob is sitting outside the church, crying to himself, and walks into the forest. As he stops near a tree and breaks down, he is knocked out from behind by Martin, the Terminus fellow Tyreese claimed to have killed in the previous episode. He wakes up later near a campfire and sees... Gareth, who is with the other surviving Terminus members. Gareth tells Bob that he's still alive, and that there's nothing personal in what has happened between. He tells Bob that the surviving Terminus group has been forced to hunt like everyone else, and that it's ironic that Bob would be the one they captured.

Bob looks down to find that his leg has been severed, and Gareth tells him that he tastes a lot better than they thought he would. As they continue eating, Bob looks at them in equal parts horror and morbid amusement...