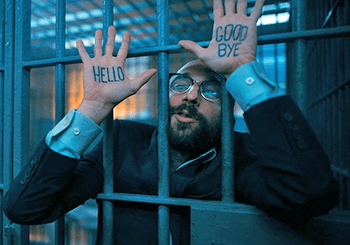 "Dad was no Boy Scout, but presidential assassination? It's never been his thing."
— Five

"The Frankel Footage" is the second episode of The Umbrella Academy's second season.

The Handler is revealed to have survived her gunshot wound to the head from the first season finale, and returns to the Commission. AJ, a fish with a body who now occupies her office, tells her that she has been demoted.

After Luther rebuffs him, Five finds a tape titled "The Frankel Footage" that Hazel had given him before his death, and collects Diego and Lila before having Elliot develop the tape. The tape is dated six days from the present, and Diego and Five are shocked to find their deceased father Reginald in the footage. The brothers break into Reginald's company, but are beaten by Reginald and Pogo.

After rejecting Five, Luther notices Vanya helping Carl into their car. Carl drops his wallet, and Luther takes the address to his house, where he finds Vanya. Although Vanya does not recognize him, Luther apologizes for his part in "what happened".

Meanwhile, Raymond is arrested for assault and battery, and meets Klaus in prison. Klaus returns to an abandoned mansion with a painting of him in it to sleep.