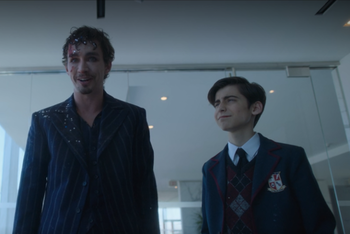 "But what about my consent?"
"Well, one grows used to things, even if, sometimes one shouldn't."
— Pogo

"Run Boy Run" is the second episode of The Umbrella Academy's first season.

Vanya is skeptical of Five's prediction. Diego interferes in the police investigation of the doughnut shop event, led by his former friend Eudora. Agents Cha-Cha and Hazel — who are trailing Five — later torture and kill the police's witness. Luther finds out that Diego was in a boxing match at the time of their father's death. Five, assisted by Klaus, attempts to find the owner of a prosthetic eye, whom he believes is connected to the apocalypse. Vanya meets her newest violin student, Leonard. Hazel and Cha-Cha corner Five in a department store. Allison attempts to come to terms with events by watching recordings of the family from when they were younger, and in the process comes to believe Luther's suspicion that there is more to Reginald's death than initially seems. The episode ends in another flash forward to the apocalypse, showing Five uncovering his siblings' corpses in the rubble of the mansion.