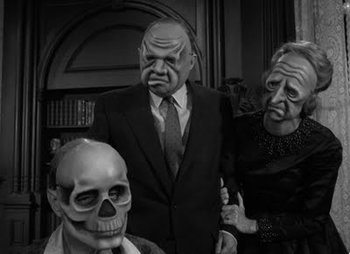 They're not going to like what they see next. (Left to right: Jason, Wilfred, Emily. Missing: Paula and Wilfred Jr.)
Rod Serling: Mr. Jason Foster, a tired ancient who on this particular Mardi Gras evening will leave the Earth. But before departing, he has some things to do, some services to perform, some debts to pay - and some justice to mete out. This is New Orleans, Mardi Gras time. It is also the Twilight Zone.
Advertisement:

Jason Foster (Robert Keith), a very wealthy old man, is dying. Cranky and candid, Jason is not cheered by a visit from his daughter Emily (Virginia Gregg) and her family—husband Wilfred (Milton Selzer), son Wilfred Jr. (Alan Sues) and daughter Paula (Brooke Hayward). All four have various terrible traits—Emily is a cowardly, self-centered hypochondriac who whines and complains about the most trivial things; Wilfred, a successful businessman, is uncultured and greedy, thinking of everything in monetary terms; Paula is extremely vain, constantly checking her appearance in the mirror (in fact, she is looking in one when she greets her grandfather); and Wilfred Jr. is an oafish, sadistic bully who enjoys causing pain and suffering to other people and animals. Moreover, it is clear that they are only there in order to claim Jason's fortune once he dies. Jason is not shy about his opinions of his family and openly insults them all. In an act of apology, he says he has a special Mardi Gras party planned for the little group that night.

After dinner, the family gathers in Jason's study, where he offers special one-of-a-kind masks. These masks, which he said are "crafted by an old Cajun", are very ugly creations. Jason informs his daughter, son-in-law, and grandchildren that a Mardi Gras custom is to wear masks that are the exact opposite of a person's true personality. Thereupon, he says sarcastically that these masks are just that—and offers the mask of a sniveling coward to Emily, a miserable miser to Wilfred, a twisted buffoon to Wilfred Jr., and a self-obsessed narcissist to Paula. He himself dons a skull, claiming that the opposite of life is death. The family is reluctant to wear the ugly masks until Jason quotes his demands as a proviso from his will: unless all four of them don the masks and leave them on until midnight, all they will receive from his vast estate is train fare home to Boston. So the foursome comply in spite of their disgust.

As the hours tick by, all four beg to be allowed to take off the masks, claiming that they are worse than uncomfortable — they are unbearable. Their pleas are wasted on Jason, who delivers his final tirade to his family; he explains that even "without [their] masks, [they're] caricatures!" Right before he dies, just after the stroke of midnight, he informs them that they have fulfilled the terms of the will and now own his entire estate. The foursome rejoice in the fact that they are now rich, until they remove their disguises and find, to their horror, that their faces have conformed to the hideous shapes of the masks. When Jason's mask is removed, it appears as if nothing has changed, but his face is actually the expression of death itself—calm, peaceful and serene. As Dr. Sam Thorne (Willis Bouchey) observes, "This must be death. No horror, no fear...nothing but peace." As the episode ends, the butler, Jeffrey (Bill Walker), looks upon the relatives' ugly faces.

Rod Serling: Mardi Gras incident, the dramatis personae being four people who came to celebrate and, in a sense, let themselves go. This they did with a vengeance. They now wear the faces of all that was inside them—and they'll wear them for the rest of their lives, said lives now to be spent in the shadow. Tonight's tale of men, the macabre and masks on the Twilight Zone.

"Even without your tropes, you're caricatures!":