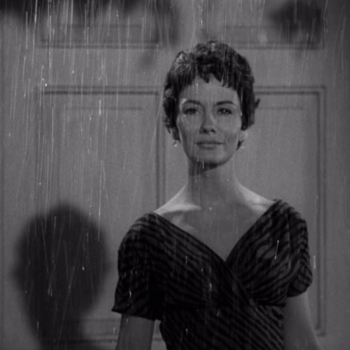 Bunny caught in a storm.
"Ring a Ding!"
Rod Serling: Introduction to Bunny Blake. Occupation: film actress. Residence: Hollywood, California, or anywhere in the world that cameras happen to be grinding. Bunny Blake is a public figure; what she wears, eats, thinks, says is news. But underneath the glamour, the makeup, the publicity, the buildup, the costuming, is a flesh-and-blood person, a beautiful girl about to take a long and bizarre journey into The Twilight Zone.
Advertisement:

"Ring-A-Ding Girl" is a story from the fifth and final season of The Twilight Zone (1959) about Bunny Blake who is a Hollywood star born and raised in the town of Howardsville. She is to fly for Rome but suddenly finds herself in her native town.

Rod Serling: We are all travelers. The trip starts in a place called birth, and ends in that lonely town called death. And that's the end of the journey, unless you happen to exist for a few hours, like Bunny Blake, in the misty regions of the Twilight Zone.