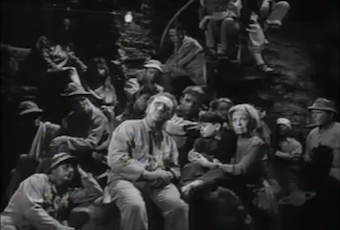 Benteen and followers taking shelter
Rod Serling: This is William Benteen, who officiates on a disintegrating outpost in space. The people are a remnant society who left Earth looking for a Millennium, a place without war, without jeopardy, without fear — and what they have found is a lonely barren place whose only industry was survival. And that is what they have done for three decades: survive; until the memory of the Earth they came from has become an indistinct and shadowed recollection of another time and another place. One month ago a signal from Earth announced that a ship would be coming to pick them up and take them home. In just a moment we'll hear more of that ship, more of that home, and what it takes out of mind and body to reach it. This is the Twilight Zone.
Advertisement:

For thirty years, an expedition to the hellish desert planet V9-Gamma was stranded, and the people had no choice but to begin their own small settlement there. The colony's survival was maintained by William Benteen (James Whitmore), a charismatic leader who believes that this strict discipline prevents them from giving up hope in the harsh, unyielding environment. When a rescue mission from Earth finally arrives, Benteen is at first as jubilant as the others, but then he sees his power and influence begin to diminish. When he realizes that the colonists do not want to stay in a group on their return to Earth, he tries to persuade them to stay. Everyone else chooses to return home, but Benteen announces that he will remain behind alone if he must.

On Thursday, the people board the ship, the rescue mission's Colonel Sloane and the colonist Al Baines, search for Benteen to give him one last chance to change his mind, but he is nowhere to be found. After they give up and leave, Benteen emerges from the top of the cave that had sheltered his people. As the ship prepares for takeoff, Benteen talks to his people as if they are still there. Then, remembering the beauty of Earth, he realizes that he is alone and wants to go home. He rushes out screaming for the ship to come back, but it is too late. He is now stranded on V9-Gamma for the rest of his life, completely alone in the barren, lifeless deserts.

On Thursday, We Leave For Tropes:

Rod Serling: William Benteen, who had prerogatives: he could lead, dictate, judge, legislate. It became a habit, then a pattern and finally a necessity. William Benteen, once a god — now a population of one.