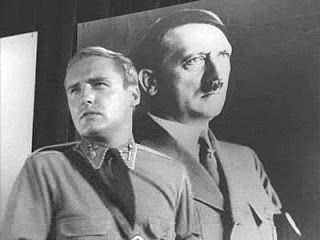 Peter Vollmer and his hero.
Rod Serling: Portrait of a bush-league Führer named Peter Vollmer, a sparse little man who feeds off his self-delusions and finds himself perpetually hungry for want of greatness in his diet. And like some goose-stepping predecessors he searches for something to explain his hunger, and to rationalize why a world passes him by without saluting. That something he looks for and finds is in a sewer. In his own twisted and distorted lexicon he calls it faith, strength, truth. But in just a moment Peter Vollmer will ply his trade on another kind of corner, a strange intersection in a shadowland called the Twilight Zone.
Advertisement:

Peter Vollmer (Dennis Hopper) is a young Neo-Nazi who is trying to get followers, but is struggling due to being very unassertive and uncharismatic. His elderly friend Ernst Ganz (Ludwig Donath), a Holocaust survivor, knows of his activities and disapproves of them, but allows Peter to regularly crash at his apartment out of pity for him.

Peter is visited by a mysterious, shadowy figure who regularly gives him advice on how to win over crowds. Soon, Peter has many followers. On his benefactor's advice, Peter murders a follower named Nick (Howard Caine) and claims the Jews did it, creating a martyr for his cause and bringing in more followers.

One day, Ernst disrupts one of his rallies and orders everyone to stop this foolishness. Ernst says back when he was young, nobody bothered to stand up to Adolf Hitler when he was doing the things Peter is doing now, and it led to the Holocaust. Now, he will not make that mistake again. Peter tries to get Ernst to go away, but Ernst humiliates him and causes his followers to desert him in disgust.

Later, the shadowy benefactor berates Peter for screwing up. Peter angrily retorts that he is doing all the work and demands his benefactor reveal himself instead of hiding in the darkness like a coward. Enraged, the man says: "Mr. Vollmer, I was writing and delivering speeches decades before you could read or understand them! I was fighting battles when your only struggle was to climb out of a womb! I was taking over the world when your universe was a crib! And as for being in darkness, Mr. Vollmer... I INVENTED darkness!" He steps out of the shadows — revealing he is Adolf Hitler (Curt Conway) himself.

Hitler says he is done giving advice. From now on he gives orders. He hands Peter a gun and orders him to kill the Jew, Ernst, telling Peter that weakness is no longer tolerated. Peter is to become steel.

Peter confronts Ernst in their apartment and threatens him with the gun. Unafraid and mildly disappointed, Ernst tries to persuade him to turn back to the light before it is too late, but Peter shoots him in the gut, declaring that he is made of steel. With his last breaths, Ernst reminds Peter that ideas, like freedom and equality, cannot be killed with a mere bullet.

Hitler congratulates Peter on his kill and asks how he feels. Peter declares that he felt like he was immortal. Hitler roars, "Mr. Vollmer, we are immortal!"

Later, the police confront Peter, saying he is a suspect in Nick's murder. Peter tries to escape and is gunned down. In shock at his pain and blood, Peter goes insane, screaming, "There's something very wrong here... Don't you understand that I'm made out of steel?"

Disappointed, Hitler fades back into the shadows, searching for another candidate to spread his vile messages of hate.

Rod Serling: Where will he go next, this phantom from another time, this resurrected ghost of a previous nightmare? Chicago? Los Angeles? Miami, Florida? Vincennes, Indiana? Syracuse, New York? Anyplace, everyplace, where there's hate, where there's prejudice, where there's bigotry — he's alive. He's alive so long as these evils exist. Remember that when he comes to your town. Remember it when you hear his voice speaking out through others. Remember it when you hear a name called, a minority attacked, any blind, unreasoning assault on a people or any human being. He's alive because through these things we keep him alive.