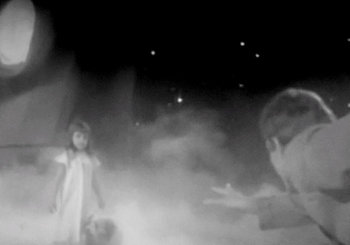 What's a nice girl like you doing in a place like this?
Rod Serling: Missing: one frightened little girl. Name: Bettina Miller. Description: six years of age, average height and build, light brown hair, quite pretty. Last seen being tucked in bed by her mother a few hours ago. Last heard: 'ay, there's the rub,' as Hamlet put it. For Bettina Miller can be heard quite clearly, despite the rather curious fact that she can't be seen at all. Present location? Let's say for the moment... in the Twilight Zone.
Advertisement:

Chris Miller and his wife Ruth hear their little girl Tina calling for them. Chris lightheartedly goes to comfort his little girl, only to find her missing. He and his wife Ruth search for Tina, but they fail to find her anywhere; desperate, they eventually call in Bill, a physicist friend. They realize Tina has ended up in Another Dimension via a strange portal, and must get her out before the portal closes. Chris enters the portal, finds Tina, and saves her just in time; as Bill tells Chris, "Another few seconds, and half of you would have been here, and the other half..."

Rod Serling: The other half where? The fourth dimension? The fifth? Perhaps. They never found the answer. Despite a battery of research physicists equipped with every device known to man, electronic and otherwise, no result was ever achieved, except perhaps a little more respect for and uncertainty about the mechanisms of the Twilight Zone.
Advertisement:

For the short story this episode was based on, see Little Girl Lost.