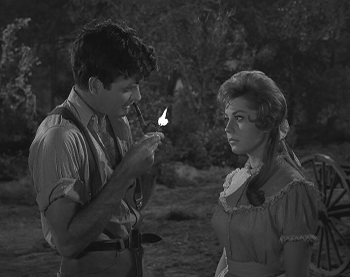 How did he light that match? Maybe it's best not to ask...
Rod Serling: Time, the mid-twenties. Place, the Midwest - the southernmost section of the midwest. We were just witnessing a funeral, a funeral that didn't come off exactly as planned, due to a slight fallout - from the Twilight Zone.

Jeff Myrtlebank (James Best) sits up at his own funeral, causing the townspeople to flee the church in terror. Jeff follows them, angrily demanding to know why he was put in a coffin. Only his little sister Liz and his girlfriend Comfort Gatewood (Sherry Jackson) are brave enough to approach him, and they confirm that Jeff is not a zombie. Everyone testifies that Jeff had a terrible fever and the doctor declared him dead. The doctor, to save face, makes up a disease that causes suspended animation and proposes that Jeff caught it. Everyone accepts this and goes home.

After a few days, Jeff's family get concerned. Before his "death", Jeff was a slacker, but now he works furiously on mending the fence and other chores. In addition, his eating habits are different.

Jeff visits Comfort at her house. He tries to give her some freshly picked flowers, but they suddenly blacken and wilt. Frightened, she won't let him touch her. Jeff gets angry; everyone's been avoiding him since his revival, and it seems she's no different.

As Jeff tries to leave, Comfort's brother Orgram, who always hated him, orders him to never come back. Jeff refuses to give in to his demands. Orgram boasts about how he always beat him up when they were younger, but Jeff takes him out with a few punches before leaving.

The town holds a meeting and discusses Jeff. An angry Orgram reminds everyone that Jeff had previously been a wimp compared to him. The doctor insists that he was sure that Jeff was dead, he poked his corpse with a pin and held a mirror to his lips to check for breath. After some debate, the people conclude that Jeff's body must have been possessed by a demon.

Jeff is taking a walk when Comfort runs up, warning him that the townspeople have formed an angry mob. Jeff thanks her and proposes. Before she can answer, the mob arives, demanding that Jeff leave town or else. Jeff says his decision depends on Comfort's answer. Comfort says yes, she will marry him and so Jeff tells the mob he will stay. If he is Jeff Myrtlebank, they have nothing to worry about. But if he is a demon like they say, they'd better leave him and Comfort alone... or else.

Terrified, the mob leaves. When they are alone, Comfort asks Jeff if he can really do those things. Jeff replies that he was bluffing. He starts to smoke... lighting his pipe without striking his match! Shocked, Comfort asks how he did that. Jeff says she's just seeing things, takes her hand, and leads her home. The gate closes by itself.

Rod Serling: Jeff and Comfort are still alive today, and their only son is a United States senator who's noted as an uncommonly shrewd politician - and some believe he must have gotten his education in The Twilight Zone.

The Last Tropes of Jeff Myrtlebank