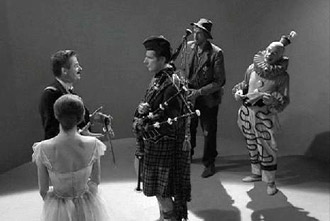 Behold. The original Toy Story.
Rod Serling: Clown, hobo, ballet dancer, bagpiper, and army major — a collection of question marks. Five improbable entities stuck together into a pit of darkness. No logic, no reason, no explanation; just a prolonged nightmare in which fear, loneliness and the unexplainable walk hand in hand through the shadows. In a moment we'll start collecting clues as to the whys, the whats, and the wheres. We will not end the nightmare, we'll only explain it — because this is the Twilight Zone.
Advertisement:

A uniformed Army major wakes up to find himself trapped inside in a large metal cylinder, where he meets a clown, who introduces him to the others, a hobo, ballet dancer, and a bagpiper. None of them has any memory of who they are or how they became trapped. The major, being the newest arrival, is the most determined to escape. He is told there is no way out except the ceiling, which is too high to reach but nonetheless he investigates and perseveres. The major's questioning reveals that the characters have no need for food or water and indeed feel nothing in general.

The characters question where, what and who they are, with the ballerina informing the major, "We are in the darkness; nameless things with no memory – no knowledge of what went before, no understanding of what is now, no knowledge of what will be." Guesses are made about the nature of where they have been placed: the Ballet Dancer speculates that they’re on another planet or a spaceship; the bagpiper that they're "dream figures in someone else's dream"; the hobo that they are all dead and in limbo; and the major that they are in Hell.

Eventually the ballet dancer suggests a plan to escape: forming a tower of people, each person on the other's shoulders. The plan almost works, but a loud sound shakes the cylinder and sends the five tumbling to the ground. Now even more determined, the Major fashions a grappling hook out of loose bits of clothing and his sword. By reforming the tower, he manages to grapple onto the edge of the container. As he turns to survey the area surrounding the cylinder, he tumbles to the ground outside. The other characters talk about him, and the Clown says the Major will return but not to rescue them: "He may have been right...this may be Hell."

The scene cuts to a little girl picking up a doll from the snow - a doll in the dress of an Army major. A kindly woman tells her to "Put it back in the barrel with the rest of them." It is revealed that the cylinder is a Christmas toy collection bin for a girls' orphanage, and that all five characters are nothing more than dolls. The loud noise was the shaking of a hand held bell which the woman used to attract donations.

The final shot is of the five characters, now seen as dolls with painted faces and glass eyes. The ballet dancer moves to hold the hand of the major and her eyes fill with tears.

Rod Serling: Just a barrel, a dark depository where are kept the counterfeit, make-believe pieces of plaster and cloth, wrought in the distorted image of human life. But this added, hopeful note: perhaps they are unloved only for the moment. In the arms of children there can be nothing but love. A clown, a tramp, a bagpipe player, a ballet dancer, and a major. Tonight's cast of players on the odd stage known as the Twilight Zone.

Five Tropes in Search of an Exit: