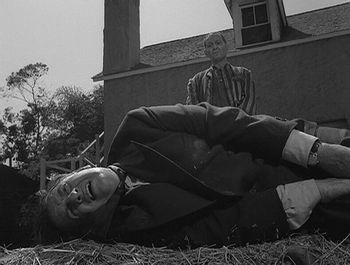 Becker passes judgment on Lütze.
Rod Serling: Mr. Schmidt recently arrived in a small Bavarian village, which lies eight miles northwest of Munich — a picturesque, delightful little spot one time known for its scenery, but more recently related to other events having to do with some of the less positive pursuits of man: human slaughter, torture, misery, and anguish. Mr. Schmidt, as we will soon perceive, has a vested interest in the ruins of a concentration camp — for once, some seventeen years ago, his name was Gunter Lütze. He held the rank of a captain in the SS. He was a black-uniformed, strutting animal whose function in life was to give pain, and like his colleagues of the time, he shared the one affliction most common amongst that breed known as Nazis: he walked the Earth without a heart. And now former SS Captain Lütze will revisit his old haunts, satisfied perhaps that all that is awaiting him in the ruins on the hill is an element of nostalgia. What he does not know, of course, is that a place like Dachau cannot exist only in Bavaria. By its nature, by its very nature, it must be one of the populated areas of the Twilight Zone.
Advertisement:

Gunter Lütze (Oscar Beregi), a former captain in the SS, returns to the ruins of Dachau concentration camp under the false identity of "Mr. Schmidt" to relive the memories of his time as its commandant during World War II. He revels in the recollections of the torment he inflicted on the inmates, remembering with a cold smile the suffering he was responsible for. As he walks around the gallows and prepares to leave, he is surprised to see Alfred Becker (Joseph Schildkraut), one of the camp's inmates. As they talk, Becker relentlessly dogs Lütze with the reality of his grossly inhumane treatment of the inmates, while Lütze stubbornly and unemotionally insists that he was only carrying out his orders and had no idea that the Third Reich planned to exterminate Jews. Several other former inmates appear; they put Lütze on trial for crimes against humanity, and find him guilty. Before Becker can pronounce the sentence, Lütze remembers that he killed Becker 17 years ago, on the night US troops came close to Dachau, and realizes that Becker — as well as all the men who witnessed his trial — are ghosts. As punishment and atonement, Lütze is made to undergo the same horrors he had imposed on the inmates. He is not physically touched; rather, he experiences the pain in his mind, culminating near the gate, the gallows, and the detention room, where he screams in agony, having been driven insane.

Before departing, Becker's ghost informs him, "This is not hatred. This is retribution. This is not revenge. This is justice. But this is only the beginning, Captain. Only the beginning. Your final judgment will come from God." Lütze is eventually found and taken to a mental institution for the criminally insane, leaving his finders to survey the remains of the camp in wonder and bafflement, wondering what could possibly have driven him insane in just two hours. The doctor who examined him (Ben Wright) looks around, visibly upset, and asks: "Dachau. Why does it still stand? Why do we keep it standing?"

Rod Serling: There is an answer to the doctor's question. All the Dachaus must remain standing. The Dachaus, the Belsens, the Buchenwalds, the Auschwitzes — all of them. They must remain standing because they are a monument to a moment in time when some men decided to turn the Earth into a graveyard. Into it, they shoveled all of their reason, their logic, their knowledge, but worst of all, their conscience. And the moment we forget this, the moment we cease to be haunted by its remembrance, then we become the gravediggers. Something to dwell on and to remember, not only in the Twilight Zone, but wherever men walk God's earth.
Advertisement: