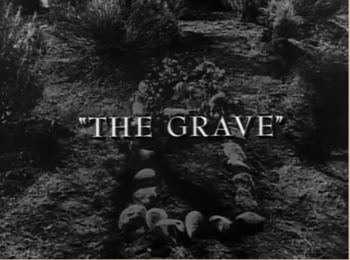 "Deep down we know the dead can't really hurt nobody..."
Advertisement:

In an old dusty western town, notorious outlaw Pinto Sykes emerges from a building in broad daylight. Unbeknownst to him, he has been set up for an ambush by the locals. The townfolk gun Sykes down in the middle of the street and take him to the town jail, where he finally dies. An elderly onlooker proudly claims the whole ordeal to be over...

Rod Serling: "Normally the old man would be correct. This would be the end of the story. We've had the traditional shootout on the street and the bad man will soon be dead, but some men of legend and folktale have been known to continue having their way even after death. The outlaw and killer Pinto Sykes was such a person, and shortly we'll see how he introduces a town and a man named Conny Miller in particular to the Twilight Zone."
Advertisement:

Pinto Sykes' nemesis, hired gunman Conny Miller (Lee Marvin) later arrives in town to find out his rival has been shot and killed by the townsfolk. When his courage to face Sykes is called into question, Miller accepts a $20 bet to visit Pinto Sykes' grave on the hill. Sounds simple right? Well not really. Before he died, Pinto Sykes swore revenge on Miller, and threatened to reach out and kill him if he ever came near his grave. Miller is challenged to visit the grave, despite Sykes' ominous warning.

As proof of his visit, Miller is to stick a knife into the grave. Miller does it quickly and simply, only to mysteriously fall over, as if something pulled him...

The following morning, the townsfolk find that Miller hasn't returned and thought he had given up on the bet. That notion is debunked right away as they also find his horse and gear are still in front of the bar. They go up to the graveyard only to find Miller lying dead near Pinto Sykes' grave, his coattail pinned by the knife he has driven into the dirt.

The townsfolk figure that Miller had died of a heart attack. Not noticing his loose jacket in the darkness, he inadvertently stabbed his knife through it and pinned himself in place. He tried to get up, but mistook the pull from his jacket as Sykes grabbing him from the afterlife and died of fright.

Pinto's sister Ione steps forward and asks the group how Conny's jacket got loose enough for it to fall over Pinto's grave. They suggest that the jacket was unbuttoned and the wind blew it over the grave. Ione then asks which direction the wind was blowing the night before. The wind was blowing in the same direction as it is now. Ione stands up in the same spot Conny was standing and challenges the onlookers to see if her cloak is blowing over the grave.

It isn't. Ione laughs chillingly as the episode ends.

Rod Serling: Final comment. You take this a grain of salt or a shovelful of earth as shadow or substance. We leave it up to you. And for any further research check under 'G' for ghosts in the Twilight Zone.