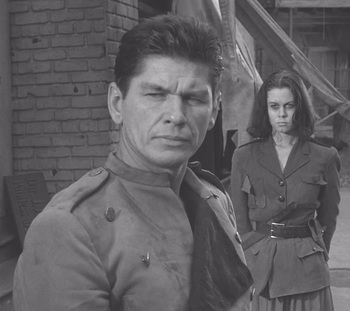 The Witch with the Twitch meets the Man with the Death Wish.
Rod Serling: This is a jungle, a monument built by nature honoring disuse, commemorating a few years of nature being left to its own devices. But it's another kind of jungle, the kind that comes in the aftermath of man's battles against himself. Hardly an important battle, not a Gettysburg or a Marne or an Iwo Jima. More like one insignificant corner patch in the crazy quilt of combat. But it was enough to end the existence of this little city. It's been five years since a human being walked these streets. This is the first day of the sixth year - as man used to measure time. The time: perhaps a hundred years from now. Or sooner. Or perhaps it already happened two million years ago. The place? The signposts are in English so that we may read them more easily, but the place is the Twilight Zone.
Advertisement:

A female soldier (Elizabeth Montgomery) wanders into a ghost town. While searching for supplies, she admires a dress in a department store window, but moves on. She enters a restaurant's kitchen, crushes a tarantula, and finds some canned chicken. Before she can eat, a male soldier (Charles Bronson), wearing the enemy uniform, enters. She immediately throws a bottle, a butcher knife, and a pot at him. He ducks, but the woman tackles him through a table and rains punches down on him. He fights back and manages to knock her out-cold, then ravenously devours the chicken.

After eying the model on a pin-up calendar, the man considers his options, then pours some water on the woman to revive her. She backs away from him in fear and anger. He offers her the remaining food, and explains that pretty much everyone else is dead, so he doesn't want to fight anymore. He finishes his speech by saying that she is pretty. She just stares at him blankly, and he realizes that she does not speak English. With a heavy heart, he leaves.

After the woman has finished eating, she continues her exploration of the city, and enters the barbershop, where the man is shaving and washing his hair and face. He tosses a bar of soap to her, which she catches. Eying him with suspicion, she washes her own face and hair. The man walks away. With nothing better to do, the woman follows him. They come to a theater. The man raids the cash register, but realizes that he's being silly and throws the money away. Suddenly, they spot two skeletons with working rifles. They dive for them and point the weapons at each other, but calm down and holster them.

They come to the department store window, where the woman admires the dress again and calls it "прекрасный" ('prekrasnyj', Russian for "pretty"). The man breaks the window and gives her the dress. She goes into an office to change, but finds it full of recruitment propaganda posters. Reminded of the old hostilities and filled with a murderous rage, she bursts out of the room and opens fire on the man, who barely rolls out of the way. Disappointed, he leaves, with the woman keeping her gun trained on him until he is out of sight.

That night, the woman takes shelter from the rain in the barbershop. She sits in one of the chairs, wraps herself in a blanket, and cries herself to sleep.

The next morning, the man has changed from his army uniform into a suit, and is collecting jars of fruit. He notices the woman hiding behind a car. He angrily yells at her to go away, but she steps out of her hiding place and reveals that she is wearing the dress and has put her hair into a ponytail. Mesmerized, he calls her "precrassny". Upon hearing this, she begins to melt, and smiles. The two of them walk into the distance, resembling a bride and groom.

Rod Serling: This has been a love story, about two lonely people who found each other, in The Twilight Zone.