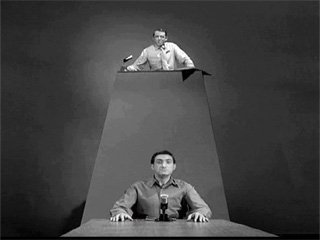 "Wordsworth, Romney. Obsolesence".
Rod Serling: You walk into this room at your own risk, because it leads to the future, not a future that will be but one that might be. This is not a new world, it is simply an extension of what began in the old one. It has patterned itself after every dictator who has ever planted the ripping imprint of a boot on the pages of history since the beginning of time. It has refinements, technological advances, and a more sophisticated approach to the destruction of human freedom. But like every one of the superstates that preceded it, it has one iron rule: logic is an enemy and truth is a menace... This is Mr. Romney Wordsworth, in his last forty-eight hours on Earth. He's a citizen of the State but will soon have to be eliminated, because he's built out of flesh and has a mind. Mr. Romney Wordsworth, who will draw his last breaths in the Twilight Zone.
Advertisement:

In this totalitarian society, Romney Wordsworth (Burgess Meredith) is arrested for being "obsolete". The reason for this is his profession, librarian. As the State bans all books, he is therefore obsolete. He is put on trial with the Chancellor (Fritz Weaver) serving as judge. It is revealed that Wordsworth also believes in God, whom the State declares does not exist. This does not of course make the Chancellor more fond of him. He is held to be obsolete and sentenced to death. Wordsworth makes three requests: that only his assassin know the method of his death, that he die at midnight the next day, and that his execution be televised. These requests are granted.

Roughly an hour before his execution, he invites the Chancellor to his room and says that he chose to be killed by a bomb set to explode at midnight. He then locks the door, trapping them both in. Wordsworth reminds the Chancellor that they are on TV, and now they will prove which is stronger, the will of the State or that of the individual.

At first, the Chancellor is unflappable, but when he realizes that no one is coming to save him since it would make the State seem weak, he slowly begins to panic. In contrast, Wordsworth quietly reads a Bible. Finally, the Chancellor screams "In the name of God, let me out!" Wordsworth hands him the key and the Chancellor dives out of the room, just as the bomb explodes and kills Wordsworth.

The Chancellor returns to his court, but finds his old subaltern in his usual seat. He demands an explanation, and is informed that due to his cowardice and invoking God, he has been judged obsolete. He begs for a second chance, citing his previous accomplishments, but they are unmoved. He tries to escape, but the court members assault him and drag him away.

Rod Serling: The Chancellor, the late Chancellor, was only partially correct. He was obsolete. But so was the State, the entity he worshiped. Any state, any entity, any ideology that fails to recognize the worth, the dignity, the rights of man, that state is obsolete. A case to be filed under "M" for mankind... in the Twilight Zone.
Advertisement: