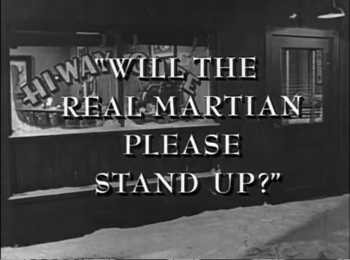 "We're gonna have a problem here..."
Rod Serling: "Wintry February night, the present. Order of events: a phone call from a frightened woman notating the arrival of an unidentified flying object, then the checkout you've just witnessed, with two state troopers verifying the event – but with nothing more enlightening to add beyond evidence of some tracks leading across the highway to a diner. You've heard of trying to find a needle in a haystack? Well, stay with us now, and you'll be part of an investigating team whose mission is not to find that proverbial needle, no, their task is even harder. They've got to find a Martian in a diner, and in just a moment you'll search with them, because you've just landed – in the Twilight Zone."

Two state troopers respond to a call of an alien UFO landing in a remote area in the woods. The trail left by the alien leads them to a nearby diner, where they find a group of bus travellers. Two married couples, Ethel, a professional dancer, a sour-faced businessman named Ross, the bus driver, and one crazy old man named Avery. The mystery begins, as the policemen have to find the alien among the travellers. Suspicion grows among the group as strange things start to happen in the diner.

Will the Real Tropes Please Stand Up?:

Haley: I don't mind. I have to do a little waiting myself. You see, Mr. Ross. My name isn't Haley. And I do agree with you that this is an extraordinary place to colonize. We folks on Venus got the same idea.
Rod Serling: "Incident on a small island, to be believed or disbelieved. However, if a sour-faced dandy named Ross or a big, good-natured counterman who handles a spatula as if he'd been born with one in his mouth, – if either of these two entities walk onto your premises, you'd better hold their hands – all three of them – or check the color of their eyes – all three of them. The gentlemen in question might try to pull you in – to the Twilight Zone."