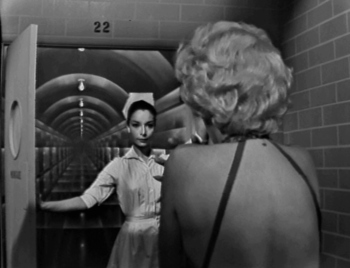 "Room for one more, honey..."
Rod Serling: This is Miss Liz Powell. She's a professional dancer and she's in the hospital as a result of overwork and nervous fatigue. And at this moment we have just finished walking with her in a nightmare. In a moment she'll wake up and we'll remain at her side. The problem here is that both Miss Powell and you will reach a point where it might be difficult to decide which is reality and which is nightmare, a problem uncommon perhaps but rather peculiar to the Twilight Zone.

The episode opens on a young blonde woman sleeping in a hospital bed; after a few moments, a loudly-ticking clock awakens her. The woman reaches for a glass of water on the nightstand, only to accidentally break it. Immediately following the crashing glass, the sound of loud footsteps echoes from the hallway; the woman gets out of bed and follows them, spotting a nurse disappearing into an elevator. She runs after the nurse and gets out on the lower floors of the hospital, where a pair of swinging doors is labeled with the number twenty-two and the word "MORGUE." As the woman stares in horror, the nurse emerges and, with a creepy grin, intones "Room for one more, honey." The blonde woman screams in fear and rushes into the elevator, while Rod Serling appears to provide the episode's narration.

The next morning, the audience learns that the blonde woman is one Liz Powell, an "exotic dancer" (read: stripper) who's been hospitalized for exhaustion and overwork. Liz speaks with her visiting agent and doctor about the previous evening's events. It seems that the whole incident was one of many dreams that she has been having; the details of the dream are always the same, and Liz feels compelled to act them out no matter what. The doctor summarily dismisses the nightmare as meaning anything, bringing in the actual night nurse to prove his point—this woman looks nothing like the mysterious woman in the morgue. But Liz is not convinced, so the doctor suggests a new tactic: breaking the pattern of the dream and thus escaping its power. Liz reluctantly agrees to give it a try.

That evening, Liz hears the ticking clock and almost reaches for the glass of water, but stops herself. After a few moments, the footsteps do not sound, and the dancer breathes a sigh of relief. She decides to reward herself with a cigarette from a pack sitting on the nightstand, but as she goes to get it, the glass breaks again. The rest of the dream plays out as it always does, and Liz goes into a further state of panic. The next morning, the doctor is disappointed to hear that the plan did not work, although he has come to a realization—it's remarkably odd that Liz correctly identified Room Twenty-Two as the hospital morgue, as she's never seen it, and no one has even mentioned it to her.

The episode cuts ahead to a few months later. A fully-recovered Liz is standing in an airport, waiting to fly to Miami Beach. As she picks up her ticket, the agent informs her that she'll be on Flight 22, which spooks her. As she tries to calm down, a clock on the wall begins echoing in her ears, and in her distressed state, she inadvertently bumps into a woman carrying a vase. The vase falls to the ground, and makes the exact same sound as the shattering glass in the dream. The panicked Liz nevertheless slowly walks toward the plane (in a single long shot), across the tarmac, and up the stairs...where a stewardess who looks identical to the morgue nurse emerges and, with that same horrible smile, remarks "Room for one more, honey."

Liz screams at the top of her lungs, rushes back down the stairs, and collapses inside the airport, sobbing. The stewardess looks on with a calm expression and pulls the door of the plane shut. As concerned patrons rush to comfort Liz, Flight 22 makes its way down the tarmac...and suddenly, violently explodes, killing everyone on board, proving that Liz's dream was not merely a nightmare, but a psychic warning that prevented her own death.

Rod Serling: Miss Elizabeth Powell, professional dancer. Hospital diagnosis: acute anxiety brought on by overwork and fatigue. Prognosis: with rest and care, she'll probably recover. But the cure to some nightmares is not to be found in known medical journals. You look for it under 'potions for bad dreams' - to be found in the Twilight Zone.