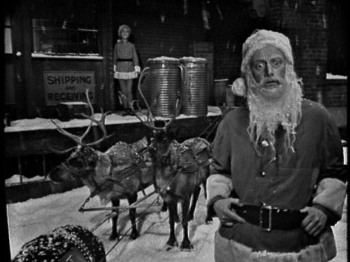 Corwin gets his wish.
Rod Serling: This is Mr. Henry Corwin, normally unemployed, who once a year takes the lead role in the uniquely popular American institution, that of the department-store Santa Claus in a road-company version of 'The Night Before Christmas'. But in just a moment Mr. Henry Corwin, ersatz Santa Claus, will enter a strange kind of North Pole which is one part the wondrous spirit of Christmas and one part the magic that can only be found... in the Twilight Zone.
Advertisement:

On Christmas Eve, Henry Corwin (Art Carney) is fired from his job as a mall Santa and thrown out of the mall for coming to work drunk. Depressed and still wearing his Santa Claus outfit, Henry tries to go back to the bar, but the bartender refuses to let him in, saying he's had enough to drink for one day.

Stumbling aimlessly in an alley, Henry finds a burlap sack that miraculously produces any item. Overjoyed, Henry begins distributing gifts to passerby. A suspicious Officer Flaherty arrests Henry and calls the mall's manager Mr. Dundee, claiming Henry has stolen merchandise from the mall. When Mr. Dundee arrives at the police station, they examine the sack, but there's nothing in it but garbage and a cat. Dundee accuses Flaherty of incompetence and berates him for wasting his time. Henry is released, but before he goes, he pulls a bottle of cherry brandy, vintage 1903, out of the sack and gives it to Dundee as a Christmas present. Attached to the bottle is a tag that reads, "To: Mr. Dundee, From: Santa Claus." Dundee is both amazed and touched; as this vintage was his favorite drink, but he was sure the supply of it ran out years ago.

Henry spends the rest of the night giving people presents until the bag is finally empty. As he stops to rest, a friendly old man points out Henry did not take a present for himself. Henry says he doesn't mind; his only wish is to be able to do this every year. Returning to the alley where he found that sack, he is amazed to find a sleigh with four reindeer attached. An elf walks up and says she's been waiting for him. It is time to go; they have to get ready for next year.

Dundee and Flaherty emerge from the police station, cheerful and slightly tipsy from sampling the brandy. They look up to see Henry and the elf riding the sleigh across the sky. Dundee invites Flaherty to spend the night at his house, adding that they will thank God for witnessing a miracle.

Rod Serling: A word to the wise to all the children of the twentieth century, whether their concern be pediatrics or geriatrics, whether they crawl on hands and knees and wear diapers or walk with a cane and comb their beards. There's a wondrous magic to Christmas and there's a special power reserved for little people. In short, there's nothing mightier than the meek... and a merry Christmas to each and all.
Advertisement:

The Night of the Tropes