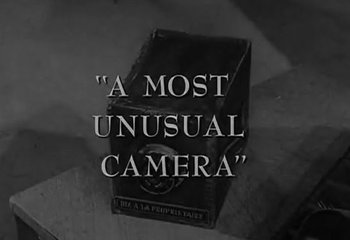 Ten to an owner...
Rod Serling: "A hotel suite that, in this instance, serves as a den of crime, the aftermath of a rather minor event to be noted on a police blotter, an insurance claim, perhaps a three-inch box on page twelve of the evening paper. Small addenda to be added to the list of the loot: a camera, a most unimposing addition to the flotsam and jetsam that it came with, hardly worth mentioning really, because cameras are cameras, some expensive, some purchasable at five-and-dime stores. But this camera, this one's unusual because in just a moment we'll watch it inject itself into the destinies of three people. It happens to be a fact that the pictures that it takes can only be developed in the Twilight Zone."

Chester Diedrich and his wife Paula, two dimwitted, low-time thieves rob an antique store. Their stolen loot is seemingly worthless, until they discover that they have plundered a camera that has the magical ability to take pictures of the future. Paula's brother Woodward breaks out of prison and decides to hang out with them. Chester devises a get-rich quick scheme by using the camera's power to bet on horse races, but the trios' good fortune seldom lasts.

The episode was the inspiration for the Goosebumps book, Say Cheese and Die.

Some Most Unusual Tropes:

Rod Serling: "Object known as a camera, vintage uncertain, origin unknown. But for the greedy, the avaricious, the fleet of foot, who can run a four-minute mile so long as they're chasing a fast buck, it makes believe that it's an ally, but it isn't at all. It's a beckoning come-on for a quick walk around the block in the Twilight Zone."