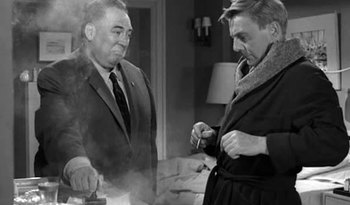 Rod Serling: You’re about to meet a hypochondriac. Witness Mr. Walter Bedeker, age forty-four, afraid of the following: death, disease, other people, germs, draft, and everything else. He has one interest in life, and that’s Walter Bedeker. One preoccupation, the life and well-being of Walter Bedeker. One abiding concern about society, that if Walter Bedeker should die how will it survive without him?

Walter Bedeker is a "perpetually ill" man who constantly despairs over the frailty and impermanence of human life. Despite receiving a clean bill of health after yet another visit from his doctor, Walter is bemoaning his impending death when a man suddenly appears in the room. The man introduces himself as a Mr. Cadwallader, and he offers to make a trade with Bedeker. He can grant him immortality and indestructibility for as long as he wishes in exchange for a rather small, unimportant, inconsequential item in Bedeker's possession: his soul. Although he realizes that Cadwallader is The Devil and is initially hesitant, Bedeker reluctantly agrees to the trade. To assuage Bedeker's lingering doubts, Cadwallader writes an escape clause into their agreement. If at any time Bedeker wishes to die, Cadwallader will end his life.

With his new Complete Immortality, Bedeker commits a string of insurance fraud scams around the city, jumping in front of trains and the like and collecting the insurance money from associated companies. When he becomes bored of these scams, he decides to jump from the roof of his apartment, much to his wife's dismay. After pleading with him not to jump, she accidentally falls off the roof herself. Wanting to give the electric chair a try, Bedeker calls the police and tells them that he killed her. To facilitate this, he acts as uncooperative as possible during the court proceedings, but his lawyer manages to get him a sentence in prison "for the rest of his natural life". Terrified at the prospect of living in prison for hundreds of years, Bedeker decides to use the escape clause. Cadwallader happily complies, giving Bedeker a fatal heart attack in his holding cell.

Rod Serling: There's a saying: "Every man is put on Earth condemned to die, time and method of execution, unknown." Perhaps this is as it should be. Case in point: Walter Bedeker, lately deceased, a little man with such a yen to live. Beaten by the devil, by his own boredom, and by the scheme of things in this, the Twilight Zone.