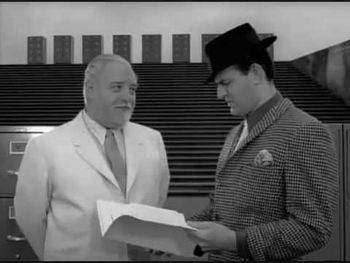 "You can check out any time you like, but you can never leave..."
Rod Serling: "Portrait of a man at work, the only work he's ever done, the only work he knows. His name is Henry Francis Valentine, but he calls himself Rocky because that's the way his life has been: rocky and perilous and uphill at a dead run all the way. He's tired now, tired of running or wanting, of waiting for the breaks that come to others but never to him, never to Rocky Valentine. A scared, angry little man. He thinks it's all over now, but he's wrong. For Rocky Valentine, it's just the beginning."
Advertisement:

We open on Rocky Valentine (Larry Blyden) in the middle of his "job," robbing a store. He stops when he hears a police siren and starts to make a break for it. He turns into an alley and opens fire on the "dirty screws" that are in pursuit while trying to climb a fence. He's hit several times in the back and falls to the ground. He comes to, seemingly alive and well, with a fat man in a white suit (Sebastian Cabot) standing over him, calling his name. He wonders how "Fats," who informs Rocky that he can call him Pip, knows his name. Pip simply states that it's his job to know. He also knows several facts about Rocky's life, including his childhood. Pip makes the situation plain: it's his job to see to Rocky's comfort and give him anything he could want. All of this for nothing in return, at all. Rocky is disbelieving but after a demonstration of that his bullets will do "Fats" no harm, he works it all out: he died in that alley and now here he is getting anything he can ask for from a kind old man in a white suit, he must be in Heaven! This realization, combined with "a dame that never quits" and a million bucks in loose change on a whim, he changes his tune.

We cut to Rocky living it up in a casino. He's hot tonight and rolling in the dough, winning round after round. He lives the highlife, with "Fats" giving him anything on demand. It's all wonderful, except for one thing: he can't quite figure out how a crook like him managed to get through the pearly gates. He asks "Fats" if they have a hall of records around this place, which they do. So they go there, "it's always open," and pull up his file. With such wonderful notes as "Age of 6, slaughtered small dog," Rocky wonders if there's been some misunderstanding. Pip assures him, there's been no mistake. He's right where he's supposed to be. And Rocky brushes it off—if it don't bother The Big Man then it don't bother him none.

We cut back to the casino. Rocky is winning again. He always wins. It's the same back at his fancy pad, the dames are getting dull and he wins a game of pool on the first stroke. He summons "Fats" and explains his boredom. "Fats" makes a suggestion—perhaps he would be happier if he went back to his old ways. This gets Rocky excited, finally some action, some risk. But "Fats" would have it "exactly as he requested" and that's no good. There's no point. It's not the same, artificial risk. He'd "know" and it's eating him up. He goes into a frenzy, telling Pip, "I don't belong in Heaven, see? I want to go to the other place." "Fats" then delivers the Wham Line that this episode is famous for

: "Heaven? Whatever gave you the idea you were in Heaven, Mr. Valentine? This is the other place!!" As the realization dawns on Rocky's face he frantically tries to open the now locked door while "Fats" laughs at his desperation and the camera pans up.

A Nice Place to Trope:

Rod Serling: "A scared, angry little man who never got a break. Now he has everything he's ever wanted and he's going to have to live with it for eternity, in The Twilight Zone."
Feedback

This is the other place

Bored with his afterlife, Valentine suggest his guide Pip, or "Fats" to send him to "The other place".

Unfortunately, "Fats" reveals to him that he was in "The other place" since the start of his afterlife.

Example of:
This Isn't Heaven

This is the other place

Bored with his afterlife, Valentine suggest his guide Pip, or "Fats" to send him to "The other place".

Unfortunately, "Fats" reveals to him that he was in "The other place" since the start of his afterlife.