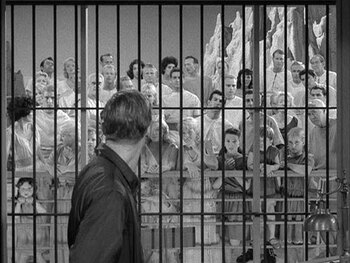 "Enjoy yourself, Mr. Conrad. Enjoy your house."
Rod Serling: You are looking at a species of flimsy little two-legged animal with extremely small heads whose name is Man. Warren Marcusson, age thirty-five. Samuel A. Conrad, age thirty-one... They're taking a highway into space—Man unshackling himself and sending his tiny, groping fingers up into the unknown. Their destination is Mars, and in just a moment we'll land there with them.
Advertisement:

A rocket piloted by two astronauts heads out on a mission to Mars. One of them, Marcusson (Paul Comi), is a positive thinker who believes that people are alike all over, even on the Red Planet. The other astronaut, Conrad (Roddy McDowall), has a more cynical view of human interplanetary nature. The impact of landing on Mars is so severe that Marcusson dies. Now alone, Conrad is consumed by fear when he hears a rhythmic sound reverberating upon the ship's hull. Expecting some unnameable evil, he finds his apprehension turning to joy when, upon opening the hatch, he sees Martians that indeed appear human, have mind-reading abilities and give the impression of being most amicable, especially the beautiful Teenya, who welcomes and reassures him. The hospitable locals lead their honored guest to his residence—an interior living space furnished in the same manner as one on Earth would have been. Conrad briefly relaxes, but soon discovers that his room is windowless and the doors cannot be opened. Momentarily, a wall slides apart, leading to Conrad's realization that he has become a caged exhibit in a Martian zoo. Conrad picks up a sign that says "Earth Creature in his native habitat" and throws it on the floor. In the episode's closing lines, Conrad yells to the heavens, "Marcusson! Marcusson, you were right! People are alike.... people are alike everywhere."

Advertisement:
Rod Serling: Species of animal brought back alive. Interesting similarity in physical characteristics to human beings in head, trunk, arms, legs, hands, feet. Very tiny undeveloped brain; comes from primitive planet named Earth. Calls himself Samuel Conrad, and he will remain here in his cage with the running water and the electricity and the central heat, as long as he lives. Samuel Conrad has found the Twilight Zone.
Advertisement:

Tropes Are Alike All Over: