Recap / The Twilight Zone S1E23 "A World of Difference" 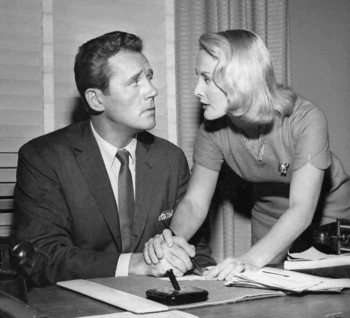 Arthur Curtis (or is it Gerald Raigan?) talks to Nora.
Rod Serling: You're looking at a tableau of reality, things of substance, of physical material: a desk, a window, a light. These things exist and have dimension. Now this is Arthur Curtis, age thirty-six, who also is real. He has flesh and blood, muscle and mind. But in just a moment we will see how thin a line separates that which we assume to be real with that manufactured inside of a mind.
Advertisement:

It's just another workday for Arthur Curtis (Howard Duff), a respectable businessman. After giving his secretary some instructions, he enters his office and tries to make a phone call, but the phone isn't working. However, that's not his biggest problem, because his whole world is about to change with the utterance of one word: "Cut."

Arthur, who thought he was alone in the office, turns around. He discovers that one of the walls has somehow been replaced by a soundstage, complete with director and a full production crew! According to these people, Arthur is actually Gerald Raigan, an actor playing the titular role in the film The Private World of Arthur Curtis. However, Gerald believes that he really is Arthur Curtis.

Gerald is assaulted by his angry former wife Nora, who wants to squeeze from him the money given to her by the court decision (as much of it as she can). However he never caves in and continues claiming that he is Arthur Curtis. The episode is dedicated to his tribulations in the in-universe Real Life where he is always treated as Gerald Raigan but continues to insist that he is Arthur Curtis.

Advertisement:
Rod Serling: The modus operandi for the departure from life is usually a pine box of such and such dimensions, and this is the ultimate in reality. But there are other ways for a man to exit from life. Take the case of Arthur Curtis, age thirty-six. His departure was along a highway with an exit sign that reads, 'This Way To Escape.' Arthur Curtis, en route to the Twilight Zone.

A World of Tropes:

TZ: A World of Difference

Arthur Curtis goes about his day as usual, but then he spots a film crew where a wall used to be.....

TZ: A World of Difference

Arthur Curtis goes about his day as usual, but then he spots a film crew where a wall used to be.....