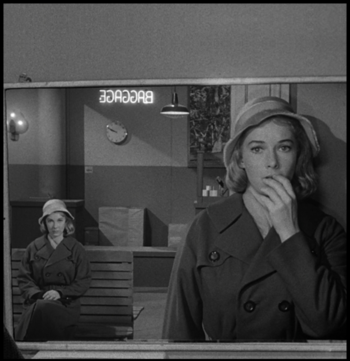 Hey, she looks familiar...
Rod Serling: Millicent Barnes. Age twenty-five. Young woman waiting for a bus on a rainy November night. Not a very imaginative type is Miss Barnes: not given to undue anxiety or fears or for that matter even the most temporal flights of fancy. Like most young career women she has a generic classification as a, quote: "Girl with a head on her shoulders", end of quote. All of which is mentioned now because, in just a moment, the head on Miss Barnes' shoulders will be put to a test. Circumstances will assault her sense of reality and a chain of nightmares will put her sanity on a block. Millicent Barnes, who in one minute, will wonder if she is going mad.
Advertisement:

A young woman named Millicent (Vera Miles) believes it is a prank when her suitcase is mysteriously moved around a bus terminal, and people claim to have seen her before even though she's never seen them. Things take a turn for the worst when she also sees a woman who looks like her on the bus.

Rod Serling: Obscure and metaphysical explanation to cover a phenomenon. Reasons dredged out of the shadows to explain away that which cannot be explained. Call it 'parallel planes' or just 'insanity'. Whatever it is, you will find it in the Twilight Zone.
Advertisement: