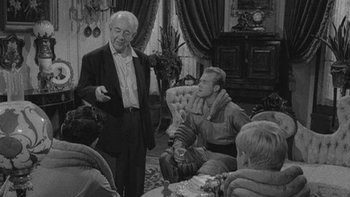 "As long as there are men, there can be no peace."
Rod Serling: The time is the day after tomorrow. The place: a far corner of the universe. A cast of characters: three men, lost amongst the stars. Three men sharing the common urgency of all men lost - they're looking for home. And in a moment, they'll find home; not a home that is a place to be seen but a strange, unexplainable experience to be felt.
Advertisement:

In the year 2186, three astronauts land on an asteroid orbiting two suns. On the asteroid, everything looks like mid-20th century America, only all the people there are frozen in place. Realizing that they can't leave the asteroid without fuel for their ship, they know they have to settle in this disturbing place. While moving through the town they finally encounter someone that moves and talks: Mr. Wickwire, the human-appearing robot caretaker of the asteroid. He explains that the asteroid was created as a place of peace, a graveyard where those who could afford it could "experience" the dreams they couldn't achieve in life, like being elected mayor or winning a beauty contest. A genial host, Mr. Wickwire serves the astronauts drinks while asking them about the news from Earth. They explain that there was an atomic war in 1985, and that Earth is still rebuilding. Mr. Wickwire asks them about their greatest desire, and the astronauts agree that what they want most is to return to earth in their ship. Then, as they begin to fall to the floor, they realize that they've been poisoned and ask Wickwire why he's doing this.

Mr Wickwire explains that "As long as there are men, there can be no peace."

The last shot is of Wickwire arranging their dead but preserved bodies inside their ship, complete with a flag, achieving in death the dream they did not achieve in life.

Rod Serling: Kirby, Webber, and Meyers, three men lost. They shared a common wish - a simple one, really. They wanted to be aboard their ship, headed for home. And fate - a laughing fate - a practical jokester with a smile stretched across the stars, saw to it that they got their wish, with just one reservation: The wish came true, but only in the Twilight Zone.
Advertisement: