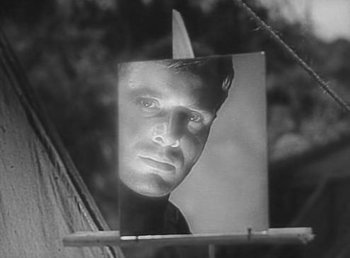 Uh-oh...
Rod Serling: Infantry Platoon, U.S. Army, Philippine Islands, 1945. These are the faces of the young men who fight, as if some omniscient painter had mixed a tube of oils that were at one time earth brown, dust gray, blood red, beard black, and fear yellow-white, and these men were the models. For this is the province of combat, and these are the faces of war.
Advertisement:

William Fitzgerald is a Lieutenant serving in the U.S Army in the Philippines in World War II. After an action in which four of his men are killed, "Fitz" is particularly disturbed. His solicitous CO, Capt. Riker (Dick York) asks what's the matter. It turns out that Fitzgerald wrote down the names of the four men who were going to die—in advance. He has mysteriously gained the ability to see oncoming death on faces of his comrades, in the form of a shining light.

Rod Serling: From William Shakespeare, Richard III,note It's actually from Richard II a small excerpt. The line reads, 'He has come to open the purple testament of bleeding war.' And for Lieutenant William Fitzgerald, A Company, First Platoon, the testament is closed. Lieutenant Fitzgerald has found the Twilight Zone.
Advertisement: