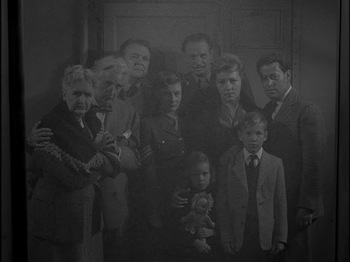 A man named Carl Lanser (Nehemiah Persoff) finds himself on a cargo liner named the S.S. Queen of Glasgow without anyone he knows, as well as without any knowledge of how he got there or who he is. But somehow he knows something horrible is going to happen, although he doesn't know what or why, only when it will happen: exactly at 1:15 a.m. Further compounding Lanser's worries is his seemingly firsthand knowledge of the hunting tactics of German submarines, as well as the realization that he was born in Frankfurt, Germany, which raises suspicion from the ship's captain. Further worry and confusion is raised when upon searching his cabin, Lanser finds a Kriegsmarine officer's cap among his possessions, with his name written upon the inside.

At 12:05 a.m., the Glasgow's overworked engines break down, forcing the captain to stop the ship dead while repairs are made. This brings Lanser's distress to a boil, unable to shake the feeling of impending doom in his mind. As 1:15 approaches, he snaps and begins running through the ship's passageways in a panic, shouting an alarm that a German U-boat is about to attack, but the ship suddenly seems to have become deserted. Finally happening upon a group of passengers, he attempts to warn the passengers in a near-mad, fervent state to abandon ship, but the passengers just stare at him silently before vanishing. Running back up on deck, Lanser spots to his horror the surfaced U-boat off the ship's side, and is even more horrified to see, upon looking through a pair of binoculars, none other than himself, in Kriegsmarine officer's attire, sitting in the U-boat's command tower, right as he gives the order to fire upon the Glasgow, exactly at 1:15 a.m.

Lanser experiences the horror of the attack firsthand as the ship is relentlessly bombarded by the sub's mounted guns, thrown overboard into the sea and drowning as the ship swiftly sinks below the waves. Later, aboard the U-boat, in the captain's quarters, Kriegsmarine Captain Carl Lanser cheerfully remarks on the success of the sinking to his second-in-command Lt. Mueller, who, unlike Lanser, seems to be uncomfortable with the manner of the sinking. When pressed by Lanser to express his worries plainly, Mueller expresses a fear that for sinking an unarmed, disabled ship carrying many innocent men, women, and children aboard, that they're likely to now be damned in the eyes of God for their crime, forced to relive that night endlessly in their own private hell after their own deaths, a supposition that brings a degree of fear and worry into the formerly jubilant Lanser's eyes...

Rod Serling: The S.S. Queen of Glasgow, heading for New York, and the time is 1942. For one man, it is always 1942 - and this man will ride the ghost ship every night for eternity. This is what is meant by paying the fiddler. This is the comeuppance awaiting every man when the ledger of his life is opened and examined, the tally made, and then the reward or the penalty paid. And in the case of Carl Lanser, former Kapitänleutnant, Navy of the Third Reich, this is the penalty. This is the justice meted out. This is judgment night in the Twilight Zone.