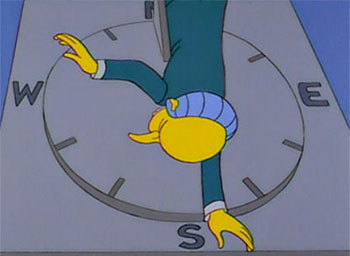 This is not a clue... or is it? It is. From his perspective, he is pointing to the letters "M" and "S" — Maggie Simpson.
Advertisement:

"Who Shot Mr. Burns?" is The Simpsons's first multi-part episode, and the only one for the first 27 seasons of the show. It was the end of season 6 and the opener for season 7. 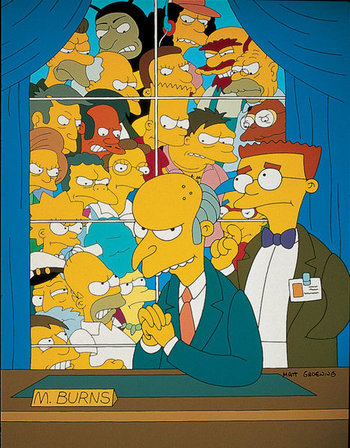 While burying a dead gerbil, Groundskeeper Willie strikes oil on Springfield Elementary. Thrilled with the prospect of the newfound riches, Principal Skinner and Superintendent Chalmers begin accepting suggestions as to what to do with the money the oil will bring; Lisa suggests that they hire famed mambo musician Tito Puente to teach. But one person in town isn't happy with the prospect of Springfield Elementary having oil—Mr. Burns, who fears that it will interfere with his monopoly on the town's power supply. After an extremely transparent attempt to disguise himself as Jimbo Jones fails, Burns vows to get the oil at any cost.

While Burns schemes, Homer becomes increasingly frustrated with the old man's complete inability to remember his name. He tries wearing a nametag around the Power Plant, which Burns fails to notice. Marge then suggests sending him a box of chocolates with a photo of the Simpson family and Homer's name to jog his memory. Burns and Smithers indulge in the candies, pointing out how Monty personally knows every member of the family thanks to their previous exploits. Unfortunately, they don't eat the last chocolate—that is, the one covering Homer's face—and Burns fails to mention the Simpson patriarch in his thank-you card. Homer completely loses his temper and unleashes an Atomic F-Bomb for the ages.

A few days later, Principal Skinner turns on the new oil derrick the school has built to tap the crude beneath them... but nothing comes out. Burns mockingly reveals that he established a slant-drilling operation, draining the oil well for himself. Faced with a huge bill for installing and dismantling the derrick, Skinner is forced to fire Willie and Tito, who, along with Lisa, swear vengeance. The oil drilling leads to other problems in town: the toxic fumes in the neighborhood force Moe to close his tavern, infuriating both him and Barney; a sinkhole opened by the operation destroys the Springfield Retirement Home, leaving Grandpa Simpson homeless and angry; and a gusher from the well destroys Bart's treehouse and injures Santa's Little Helper, which distress both him and Maggie. Delighting in his villainy, Burns tells Smithers that he's still unsatisfied with his schemes, as the people of the town can still use natural sunlight for energy. He then reveals his most evil plan of all: using a "sun-blocker" to cover the star, trapping Springfield in perpetual darkness and forcing them to rely on his power plant for all of their needs. This is too much even for Smithers, who demands that Burns stop his plot; a furious Burns fires him instead.

That night, Homer breaks into Burns's office and uses spray paint to graffiti a massive "I AM HOMER SIMPSON" on the wall—and even though Burns catches him in the act, he still can't recognize him. Homer screams that Burns is a "dead man." Those sentiments are echoed at a Town Hall meeting the next evening, when everyone in town gathers to voice their fury against Monty. Many of the citizens have armed themselves with various firearms and weapons, and seem ready to kill—but when Burns shows up armed with a pistol himself, he gloats that no one "has the guts to stop him." He then activates the sun-blocker, trapping Springfield under the cover of night. A cheery Burns goes for a walk, while other citizens notice that everyone else seems to have vanished. As Burns turns a corner, he speaks to someone offscreen:

Marge, standing alone in front of Town Hall, hears a gunshot ring out, and sees Burns stagger out from the shadows, a bullet in his chest. He collapses onto the sundial, and the town gathers in shock. Marge nervously points out that everyone in town had a motive, meaning that the mystery may never be solved...

Don't complain about the solution when you hear it.

Kent Brockman reports that Burns was taken to a hospital and pronounced dead. He was then taken to a better hospital and pronounced "Alive, but barely". With Burns in a coma and the only witnesses to the shooting being Maggie and Santa's Little Helper, the police suspect Smithers. Smithers also suspects himself, because he has a gun that was recently been fired. Recalling shooting someone, a guilt-addled Smithers goes into a Catholic confessional to vent, which turns out to be a trap by Wiggum. On TV, Smithers makes a comment from an episode of 'Pardon My Zinger' that aired on the night of the shooting. Sideshow Mel realizes that if Smithers saw that episode he could not have been at the town hall to shoot Burns, and reports his thoughts. Smithers realizes that the man he shot was Jasper, but only in his wooden leg. Meanwhile, the sunblocker is torn down, crushing Shelbyville.

With the prime suspect being the first one cleared, police are once again, and as usual, baffled, as their only clue is the bullet pulled from Burns' body. Lisa, wanting to help, names some suspects and their motives; Skinner, Willie, Moe, and Barney, whose livelihoods were endangered by Burns' oil drilling. Wiggum realizes that Tito Puente is also a suspect by that logic, and the police go out to investigate.

After a bizarre dream involving strange symbolism and Lisa talking backward, Wiggum checks the suit Burns was wearing when shot. He finds an eyelash, and a DNA scan reveals that it came from the Simpson line. At this time Burns wakes up, crying, "Homer Simpson!"

The police raid the Simpson home and find a gun in the family's car. It not only has bullet markings identical to the one from the shooting, but Homer's fingerprints are on it! Homer is arrested but escapes when Wiggum turns over the paddywagon while trying to get fast food from a drive-thru.

Lisa is unconvinced by the evidence, as the DNA was 'Simpson', not just Homer's. And a flashback reveals that Homer got his fingerprints on the gun by feeling around for an ice cream scoop he dropped.

Meanwhile, a check-up by Dr. Nick ("Hi, everybody!" "Ho, Mersimp Son!") reveals that "Homer Simpson" is the only thing Burns can say, the result of brain trauma.

Lisa goes to the town hall to investigate some more and has a revelation on who the shooter is. Smithers issues a reward for Homer's capture "Dead or alive", and word gets out that the fugitive is at the hospital Burns is at! The entire town hurries there to find Homer shaking Burns, demanding that the 'accusation' be taken back. This cures Burns' trauma, and he still has no idea who Homer is.

His speech returned to normal, Burns reveals who shot him; Maggie Simpson!

Burns reveals that after the town meeting, he saw Maggie in the Simpson car with a lollipop. Wanting to actually 'take candy from a baby', Burns went at it but found his strength to be lacking. During the struggle, his gun fell out and into Maggie's arms, firing.

Burns demands that his 'assailant' be arrested, but is shrugged off. After all, it was an accident.

The reveal of the real shooter has been referenced in several episodes since.

Gee, I hope all the suspects are this much fun!

Gee, I hope all the suspects are this much fun!