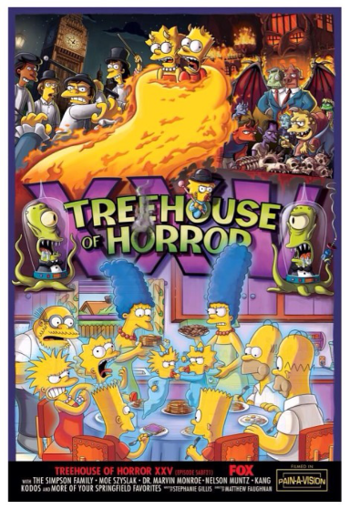 Treehouse Of Horror XXV is a Treehouse of Horror Halloween episode of The Simpsons and the third episode of the 26th season.

The show opens with Kang and Kodos welcoming us to the 25th anniversary. In an opening like The Tonight Show with Johnny Carson they give a long list of celebrity guests, but it turns out they nailed their bodies on a wall to spell out this episode's title.

While Bart is in detention, he finds a desk covered with strange runes. When he pokes them, fire spurts out. He comments that anyone who did that could get seriously hurt- so naturally, he tries to get Lisa to touch them. She notes that the runes seem to be in ancient Aramaic, and translates them with her iRunes app. Bart grabs her iPad and reads what's on there out loud.

Bart: He who reads this rune translation will be taken to damnation.

A giant hand made of fire then comes out of the desk and grabs Bart and Lisa, sending them to hell (and pulls the fire alarm lever, just because). In hell, Bart and Lisa have more demonic appearances- both have satyr legs, horns, and pointed ears, and Lisa also has bat wings and a devil tail. They meet another student writing lines ('Eternal torment is the only just punishment for the unbaptized'), and Bart asks him what he's there for. Turns out it's heresy, like Docetism (the belief that Jesus's mortal body was just an illusion). He wonders if it's still big, but gets mocked by another student.

Demon Nelson: Ha-ha! Your heresies were venialized by the Council of Palermo!

The heretic student helps explain the school to the Simpsons as they walk through the hall.

Student: We've got millipedes, tooth-heads, screaming torsos, your bleeding eyes with finger legs, and all the girls are mean girls.

A Girl Posse then arrives and mocks Lisa's dress. Her sarcastic retort impresses them, and they ask her to hang out with them. It promptly starts snowing.

Lisa: It's true- it would be a cold day in Hell when I was popular.

Lisa walks away with the other girls, and Bart is caught by the principal, who asks him for his hell pass. Bart doesn't have one, so the principal rips his skin away and throws him in a classroom. The teacher quizzes her students on what eternal torture would be best for a bank robber. She's looking for something along the lines of Ironic Hell, but none of the students have any ideas until Bart suggests making the robber eat bags of money until his stomach exploded. The teacher is impressed and gives him his skin back, along with a pumpkin sticker (which bites onto his ear.

Bart: This has never happened before- I have a crush on my teacher!
Teacher: Down here, we can make that happen.

Bart ends up demonstrating several of his other creative torture ideas for the class. The teacher is very approving. When class is out, Lisa comes up to Bart and says that she's found a portal back to Earth. Bart wonders if it's the one next to him, and Lisa says no, that's the one to superhell. Bart pulls Hot Stuff out of the portal, and wonders how he got there. Turns out, he's being punished for how lame his comics were.

Bart and Lisa go through the portal, the other end of which is at a pentagram in Mr. Burns' office. They run back home, and when they're back and Bart is being tucked into bed, he asks to change schools. Marge is happy, but Homer isn't so enthused, since he thinks it's an expensive private school. When Bart says the school is free, Homer's fine with it.

The school in question turns out to be the school of hell. Despite his parents' worries, they do allow Bart to go there for a semester, to his delight. Bart's report card for that semester: Long Division (A.K.A. slicing people in half)- A, Show and Hell (he shows that he killed Jimbo)-A, Keeping the Yankees in First Place- A, Literature of Hell (Tender are My Whipped Buttocks by F. Scott Fitzgerald, Fahrenheit 451,000 by Ray Bradbury, I'm Not Even Dead Yet by John Irving, and The O'Reilly Factor for Kids by Bill O'Reilly)- A, and Quantum Satanics- A. Homer and Marge are happy he's doing so well.

For his final exam, Bart has his mace and bag of fish ready and is supposed to torment a sinner- who turns out to be Homer. Bart doesn't want to hurt his dad, but Homer is okay with it, because of how well Bart is doing in the school of hell. Bart ends up graduating as class valedictorian.

In this take off of A Clockwork Orange as well as mixing virtually every film by Stanley Kubrick, Moe narrates his life as a former gang leader, their break-up and reorganizing the gang for one last bash up.

Homer goes to the bathroom to wash up, and sees the words 'Help Me' written in blood on the mirror. He's annoyed that the blood is asking him for a favor, and writes 'NO!!!' on the mirror in toothpaste. The message vanishes and is replaced with 'Three exclaimations? That's excessive'. Homer goes downstairs, and Marge tells him that someone left chocolate milkshakes on the counter. Lisa says that the TV will only play Married... With Children (or variations). He tries turning it off, but it doesn't work.

Lisa: The house is haunted!

Marge notes that the milkshakes have vanished... but that's Homer's fault. Later, when they're in bed, Marge says that she thinks that they aren't alone. She's right- Grandpa Simpson is in bed with them, because he got caught in their sheets after sleeping in the dryer. Marge leaves to go make up the couch for him, and Homer goes back to sleep. Someone slides into Marge's place in bed- however, that somebody is invisible. The invisible person caresses Homer, and the bed starts levitating towards the ceiling. He demands he be put down, at which point the bed (with Homer in it) promptly falls to the floor.

The Simpsons light a lot of candles in the living room, and Homer demands the ghosts show themselves in the name of the book he's holding- The Car-Lovers' Bible. Apparently he mistook it for the real deal. However, he continues with 'The power of Chrysler compels you!'. Grandpa turns the lights on, and the ghosts are revealed- the Simpsons from The Tracey Ullman Show.

Tracey Ullman!Homer: What are you, cavemen? Turn on the lights!

Grandpa Simpson freaks out and runs through Tracey Ullman!Homer, who yells for "A little respect!". He then turns the lights on, and the two Simpson families confront each other.

Modern Homer gets annoyed at his Marge telling him to do something, and is quite happy when Tracey Ullman!Marge says she likes a man who can relax. Homer compliments her on her melons (which turn out to be literal melons in the kitchen). Tracey Ullman!Homer is annoyed because, as a ghost, he can't strangle Bart. Modern Marge is annoyed that Homer likes ghosts better, and so decides to kill herself in her oven (and clean it up while she's at it).

Tracey Ullman!Marge shows up while Homer is bathing. He's happy, but freaked out when they're joined by the ghost of The Simpsons!Marge, who complains about how Homer doesn't notice her. He says that he can handle "all the ghost you can float at me", and dismisses his concerns of Tracey Ullman!Homer being a threat. Of course, Tracey Ullman!Homer takes that moment to go over with a toaster and beat Homer about the head with it until he falls unconscious and drowns.

The Simpsons!Homer: Mmm... I smell toast.

Bart and Lisa walk in. Lisa comments that she and Bart are now in charge of the house, but Bart jumps out the window rather than take on chores, and Lisa follows because she doesn't want to clean all this up herself. She botches the jump and dies on the landing. Bart rejoices about being the last of the Simpsons, but he doesn't get to celebrate for long, as Lisa knocks him off the tree branch he's on with a slingshot, killing him. Willie drags away their bodies (and Maggie's), rejoicing that now he's got stew for the winter.

Modern Marge confronts her Homer about how his desire for someone new started the whole fiasco. They're interrupted by Dr. Marvin Monroe saying that fighting will solve nothing. Marge asks if he's alive or dead, and he says he's in a sort of limbo- he can walk halfway through walls, and then gets stuck. The two Marges decide to force Modern Homer to choose between them. Tracey Ullman!Marge says he should choose her because she's younger and not yet bitter, and The Simpsons!Marge says Homer should choose her because she knows everything he's done, and yet still wants to be with him.

Tracey Ullman!Marge: That is so beautiful.

Both Marges make up with their respective Homers. The Barts ruin the mood somewhat by cutting them in half with a ghostly saw. The next morning, as both families are eating breakfast together, The Simpsons!Lisa says she had a worrisome thought: if there can be two versions of the Simpsons at once, what's stopping there from being even more?

Well, nothing, apparently. At that moment, a CGI version of the family enters, followed by an anime version of the family (with Maggie as Pikachu, Lisa as Mikasa, Bart as Naruto, Santa's Little Helper as Haku in dragon form, Homer as Zoro, and Marge as Rangiku Matsumoto), a Adventure Time family (Bart as Finn the Human, Homer as the Ice King, and Marge as Princess Bubblegum), a South Park family, an Archer family, the family's Sylvain Chomet designs, the LEGO Simpsons from Brick Like Me, a family of Minions, and the Simpsons' animal selves from a The Island of Dr. Hibbert, a previous Treehouse of Horror segment.

This episode has the following tropes