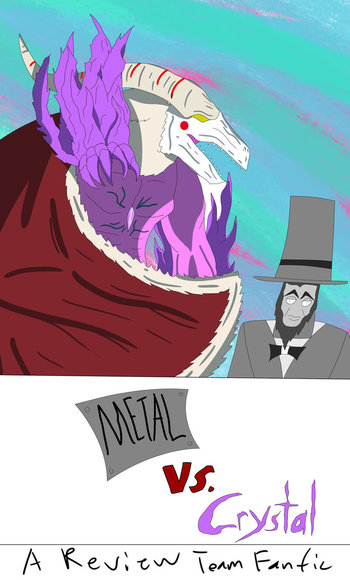 You can clearly tell which character the artist put more effort into.

The 22nd episode and the first appearance of Azazel, King of Equestria. Also, the one that had a heaping TON of changes during the re-write.

Sir creates a security robot with the likeness of Abraham Lincoln. However, he flaunts it's grandness in front of Megatron and he sets out to prove it's better than him. This takes the team to Equestria, where the utterly insane yet lovable king, Azazel, is hanging out with his wife (Celestia) and kid (Chrysta). Gladly accepting Sir's offer, Azazel fights off against the machine. Eventually, the king, despite Sir's trickery, wins and annihilates the robot, injuring Sir in the process.

And Rick, Azazel's draconic brother and Twilight's husband, arrives too late to be in the fic.