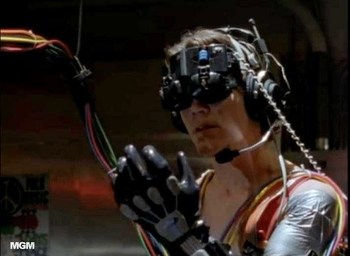 This tech's about as futuristic as the 90s could imagine it.

A scientist (Josh Brolin) creates a virtual reality device that can see into the future, but the CEO (David Warner) funding the research seeks to exploit it.

The Control Voice: Time is a river winding steadily through the landscape of tomorrow. There are those who would steal a glimpse around the next bend and those who would fight the current. But the wisest are those who turn their eyes from the waters and seek out a fellow traveler to share in the journey.