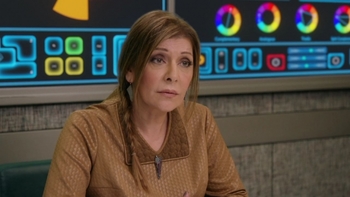 Okay, this episode's really about a huge Reveal in Moclan society, but holy crap, everybody, it's Marina Sirtis!
The Orville takes on two Moclan passengers with mysterious cargo, the reveal of which leads to a discovery that nearly tears the Union apart.