Recap / The Order of the Stick: Good Deeds Gone Unpunished 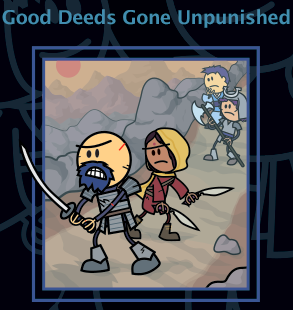 The third "prequel" book in the Order of the Stick continuity (actually including stories from 12 years before the main comic up to contemporaneous with Blood Runs in the Family). The book compiles two stories previously released only to Kickstarter backers, along with three all-new stories. The title plays on the saying "No good deed goes unpunished."

Each story focuses on a character from Azure City, most of whom were introduced in War And XPs.

The compiled stories are:

open/close all folders
That's the Spirit
Scruff and Tumble
Spoiler Alert
Advertisement:
Pier Pressure
How the Paladin Got His Scar