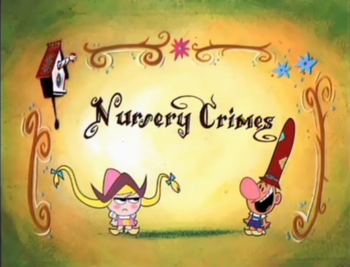 Billy wants a bedtime story to help him go back to sleep and Grim is there to get him and Mandy involved in it… literally!

The episode beings with Billy calling Mandy in the middle of the night to tell her he’s eaten 19 Atomic Frenzy Cakes and now he can’t sleep at all so she and Grim have to read him a story to go back to sleep. Once Mandy and Grim arrive they start telling Billy his stories, starting with Mandy’s “Humpy Dumpty”.

Humpty Dumpty (played by Billy) sat on a wall and had a great fall. And he fell and fell and fell until he didn’t. Humpty Dumpty explodes into a shower of egg innards and coats everyone in the kingdom with it. To celebrate “all the King’s horses, and all the King’s men and the starving villagers” are forced to eat eggs for every meal again and again. The end.

Billy is unhappy with her story its lack of a happy ending and makes his own. The story starts with a village in the middle of nowhere called “Happy Nowhere Village” where everyone was always happy, save for a wizard named Chuck who lived in a tree with his yapping pet Pomeranian named Benjamin. Chuck was never invited to the village as he was evil, mean, smelly, had terrible oral hygiene, and “was a 910-pound giant”. When he came to take his revenge he was so moved by the happiness of the village he too became happy and turned their lake into solid gold. With all the money they bought new houses and stuff for them, got better oral care, and had Benjamin’s vocal cords removed. And everyone was happy ever after.

Before Billy can leave Grim wants to tell a story from his own supernatural storybook. He starts with Hansel and Gretel and pulls the duo into the book. They’re forced to do the story to leave… and of course, Billy wanders off to hang with Pinocchio instead. He loves hanging out with him until it turns out that Pinocchio wants to be a real boy like Billy and the only way he can is to eat the flesh of a real boy. Meanwhile, Mandy spends the rest of the episode searching for Billy by meeting various fairytale characters (the Big Bad Wolf, the Evil Witch and Snow White etc.) Billy is nearly boiled alive until Mandy arrives to save him yet again. Pinocchio is turned into a tiny rocking chair and sent to the Witch’s house and crushed underneath her. When it’s time to go home it turns out Billy has finally fallen asleep and so has Grim. The episodes ends with Mandy still trapped in the book and as it fades to black Mandy gives one last ominous warning: “Someday you will all pay…” 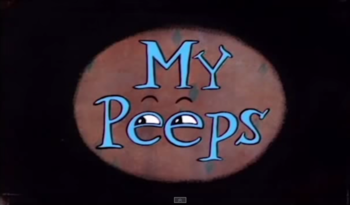 Billy has ruined his eyes and needs corrective surgery but fixing them is a real challenge, even if you’re the Grim Reaper.

The episode starts with Billy playing a video game in the dark for hours before being dragged to school by Mandy before staring at the sun for over a thousand seconds. It only causes him more trouble all the way to lunch, when Mandy decides he needs an intervention… and corrective surgery. Billy refuses to get contacts after the optometrist’s terrible demonstration and seeing the massive laser for eye surgery makes him head for the hills.

When Grim and Mandy finally corner him at his home Grim fixes his eyes perfectly. But the drawback is Billy now sees the terrible future where everyone is hurt in terrible accidents such as Irwin becoming mangled in his bike or Puddin’ being crushed by an elephant and only gets worse when he sees Mandy’s head on a table. In an attempt to fix things he tries to pull out his eyes with a plunger only for Grim, on Mandy’s orders, to zap him again to get rid of the mistake. With every zap Billy sees the world in different ways such as a hard Jhonen Vasquez-esque style, a retro-Anime style, and a saccharine world that last of which drives him nuts and attacks Grim and Mandy after he thinks Grim is messing with him. Billy rampages around the house and only stops when Grim gets back his scythe one last time and shoots Billy one last time. The episode ends with Billy having a pair of creepy looking eyes.

"My Peeps" features examples of: