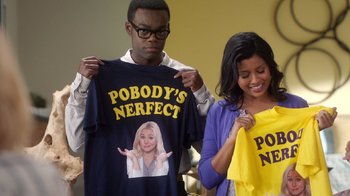 "Eleanor! Everyone hates you!"
"Look, I know this is tedious, but holding a door for someone is three points, and if you do it for everyone in the neighborhood, then that's almost a thousand points for just a start. Besides, all the big ticket items are impossible, I'm afraid. It's not as if you could, you know, "sacrifice your life to save others" or "change the consciousness of a nation." Both of which I did, by the way. Such fun!"
— Tahani

Tahani suggests that Eleanor be allowed to accrue points in the Good Place; starting at -4,000, she must exceed 1,200,000. She performs good deeds and recreates Tahani's welcoming party, winning over her neighbors with humor, but her score only increases when she advises Chidi to respond favorably to Real Eleanor's declaration of love. Eleanor learns that, since her motivation is self-preservation, her actions won't increase her score. She secretly plans to leave the Good Place to become a good person and her score reaches the target. Michael discovers both Jason's identity and his marriage to Janet, who has developed emotions and loves Jason, so Michael decides to reboot her again. When Shawn's train arrives, Janet, Jason, and Eleanor hijack it to take them to a "Medium Place".

Flashbacks show that Jason suffocated and died in a safe while trying to rob a restaurant with his friend Pillboi, who was placed on probation and not charged in his death.