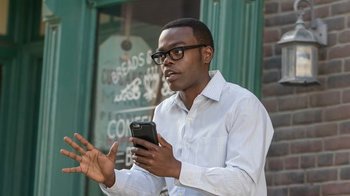 "Look, I know I can be indecisive, but what's the harm in taking a few extra minutes to find the perfect—"
"Jason, when I was rebooted, and I lost all my knowledge, I was confused and disoriented, but you were always kind to me. And according to the central theme of 231,600 songs, movies, poems, and novels that I researched for these vows in the last three seconds, that's what love's all about."
— Janet

While working together on Eleanor's defense case, Real Eleanor makes Eleanor realize she loves Chidi. Tahani confronts Jason and learns Chidi inspired his kind gestures. Chidi panics when Eleanor and Tahani both tell him they love him. Michael successfully encourages Chidi to make a decision. Eleanor insists that she and Tahani preserve their friendship, so they spend the rest of the day together. Appreciating Janet's kindness towards him, Jason decides to marry her. Eleanor and Tahani attend the wedding and, when Chidi arrives, Eleanor tells him that her love for him is that of gratitude towards a friend and teacher and Tahani admits she was just on the rebound. Declaring she has thought of a way for Eleanor to stay, Tahani leaves with her. Flashbacks show Chidi's life on Earth. One incident in his childhood showed Chidi wasted an entire recess period unable to pick teammates. Later in life, Chidi's indecisiveness made him unable to act as his best friend Uzo's best man and indirectly led to Chidi's death when an air conditioning unit, which he knocked loose, fell on him while he stood below, unable to choose a bar to visit with Uzo.