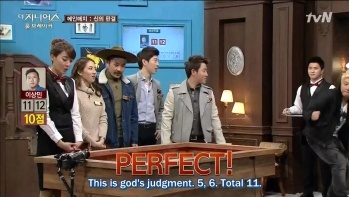 God's Judgement is a dice game where all players throw two dice 10 times. They pick two numbers beforehand and if the sum of points on the thrown dice equals to one of the numbers they chose — they get a point. There are various sets of dice and there are also additional extra sets of dice one can buy with 5 garnets.

Players can exchange dice among themselves freely but they have to present their chosen two dice to dealer before first player starts rolling.

Hongchul, Jinho and Jiwon who have few garnets band together to buy a set of special dice and share them among themselves.

Sangmin is targeted this week because of his token of immortality so he sits all by himself. Junghyun who is again without a team, is feeling lonely and keeps stalking him. Sangmin even gives him 3 garnets so he could go away and buy special die and leave him alone for a minute.

Everyone are trying to calculate chances with various sets of dice believing this to be a game of chance until 10 minutes before the match starts Jinho figures out a trick — dice can be broken in halves and put together in various combinations. Now all he needs is some time alone to find the best winning combination but other people are not giving him enough privacy. It's a race against time, because independently, Hongchul also figured out the trick. Several minutes later everyone knows about it and are hurriedly taking apart and combining their dice. Jiwon puts together his dice wrong and somehow ends up with a die with 0 on one side.

Preparation time is over and everyone starts rolling. Hongchul makes a big show out of his throwing and gets 6 points. The effect is lessened when all other players get more points with the exception of Jiwon who got screwed by his 0 die and gets 5 points. Sangmin is the last to roll and he comes to the table and reveals that he has one die with 5 on all sides and another with all 6.

Flashback. Sangmin was the first to find about dice halves. Even interrupted by Junghyun he still had enough time to put together his ideal "all 5" and "all 6" dice.

This obviously gives him 11 points each time he rolls, so he doesn't even need to pick second number. Sangmin gets perfect 10 points and wins the game. He gives token of life to Junghyun who gave him one die he needed for combination.

Jiwon with the least points is elimination candidate. Strangely enough he picks Jinho explaining it "so that it won't be a shame if i lose against such a strong character".

Deathmatch is Indian Holdem — variant of Indian Poker from the last season with more elaborate rules.

Jiwon fully realizes that his chances against Jinho who is very good at card games are low, so he wants to make it a gamble instead of game of skill by lowering amount of starting chips. Both Jiwon and Jinho spent most of their garnets buying dice so they have to borrow garnets from other players either way. They agree on three garnets which are converted to 15 chips.

Then Jiwon all-ins in the first round immediately, making the game entirely about luck of the draw. Jinho (for some reason) all-ins in response and they both miraculously tie with 2s. Second round decides everything.

Because both deathmatch players are out of chips and can't bet, it is entirely dependent on the cards. Dealer opens their cards and unbelievably it is yet another tie with 6s. They draw cards once again and Jinho loses against Jiwon's 10, ending this nerve-wracking deathmatch.