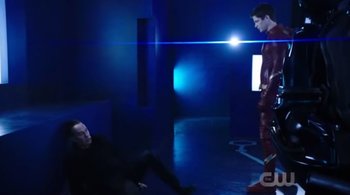 Plenty of metas have come after me, the people that I love. You know the one thing they have in common? They failed.
Advertisement:

With the Enlightenment underway, Barry uses DeVoe's chair and Cecile's powers to project himself into his mind.