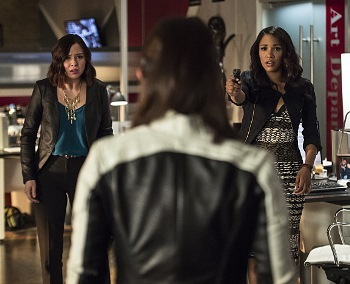 Light her up.
Advertisement:

The Darkness and the Light

The S.T.A.R. Labs team must deal with the unexpected arrival of Earth-2 Wells. But when a metahuman called Dr. Light shows up in Central City, they must decide whose advice to follow: Dr. Wells', who wants to use Dr. Light to lure out and fight Zoom, or Jay Garrick's, who wants to talk Dr. Light down and avoid confrontation with Zoom.