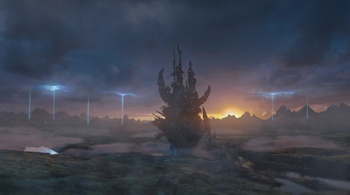 Rian and Deet acquire one half of the Dual Glaive from Maudra Argot, who hid it within her walking stick. They learn that Ordon had hidden the other half at Stone-in-the-Wood's crucible. At the Castle, Aughra offers her essence to revive skekMal in exchange for the captive Gelflings' freedom. Though skekSo accepts, he orders skekVar to kill the prisoners before they escape. Now permanently joined with the Ascendancy, Tavra reveals the Arathim-Gelfling alliance and injures skekVar before being fatally wounded by skekSil. He wins skekVar's loyalty by giving him a vial of essence to heal himself with. When it appears that Aughra's essence was not enough to prevent skekMal's death, skekSil proposes to the other Skeksis that they should create an obedient army from Arathim corpses. Rian reunites the Dual Glaive and issues a call to arms, calling all Geflings to meet at Stone-in-the-Wood. Hearing through the Crystal and threatening retaliation, skekSo orders an attack at dawn to stop the Rebellion before it can begin.