Recap / The Dark Crystal Age of Resistance S1E1: "End. Begin. All the Same." 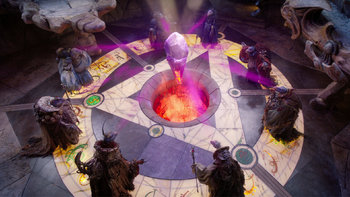 A thousand trine (years) have passed since Mother Aughra entrusted the Crystal of Truth to the alien Skeksis, who siphon its lifeforce to extend their own lives while proclaiming themselves Thra's rulers. The corrupted Dark Crystal begins to cease giving its energy away, with the Skeksis emperor skekSo ordering his scientist skekTek to devise alternative means for them to survive. skekTek accidentally learns to use the Crystal to siphon the life essence of other beings' for the Skeksis to reinvigorate themselves. He abducts the Crystal Guard Gelfling Mira during her search for an Arathim in the catacombs, resulting in her death as the Skesis feast on most of her essence. This act is witnessed by Mira's boyfriend Rian, who escapes them. Meanwhile, Princess Brea of Ha'rar uncovers a symbol after questioning the Skeksis' laws following Ha'rar's tribute to skekOk and skekLach. Another Gelfling named Deet, of the Grottan Clan, embarks on a mission to save Thra from being consumed by the Darkening, a corruption building up within the Crystal.