Recap / The Dark Crystal Age of Resistance S1E10: "A Single Piece Was Lost" 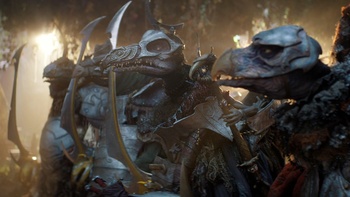 Rian and Deet are joined by Brea's group while waiting for the other clans' arrival. skekSo calls upon the Darkening before leading the Skesis to battle, ordering skekTek to remain at the Castle to work on a new army. Once the Skeksis arrive, skekSil sets up skekVar to fail in his duel with Rian and covertly kills him as the battle commences. skekMal is revealed to be alive as he shatters the Dual Glaive, only to be killed for good when urVa the Archer jumps off from the Circle of Suns, causing Aughra to return from skekMal's body. When the other clans eventually arrive, skekSo unleashes the Darkening, which Deet absorbs and redirects against the Skeksis, making skekLach's head explode and forcing the others to retreat. As Brea finds the lost shard of the Crystal in the Dual Glaive's broken hilt, Deet leaves the group in fear of her power. While events in Stone-in-the-Wood unfold, skekTek kills the rebelling Gruenaks in a moment of frustrated rage, throwing one down the shaft of the Crystal and beating the other to death. An inspired skekTek then grafts a dead Gruenak's guts with the Arathim corpse. The Skeksis are then introduced to their newly animated soldiers, the Garthim.