Recap / The Amazing World of Gumball S1E13 "The Mystery" 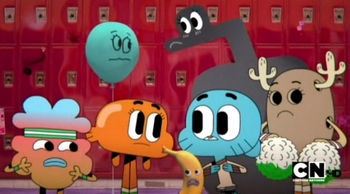 Miss Simian finds Principal Brown shaved, painted, and stuffed into Gumball's locker and forces everyone to stay after until the guilty party comes forward. And things get worse when all signs point to Gumball being the likely culprit...