Recap / The Amazing World of Gumball S3E1 "The Kids" 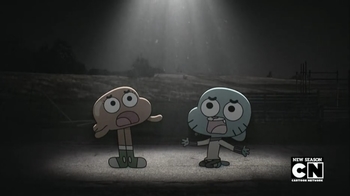 Bandage Doctor: Only a small percentage of the world doesn't age - mostly people on TV.

Gumball and Darwin's voices begin going haywire, despite not aging. When the doctor tells them that their voices breaking is normal and means they'll be growing up, Gumball and Darwin try to cling to their childhood as tightly as they can.

This episode is the last one for Logan Grove and Kwesi Boakye (the voice actors of Gumball and Darwin from seasons one and two) and the first one for Jacob Hopkins and Terrell Ransom, Jr. (the replacement voices for Gumball and Darwin...until season five's "The Copycats").