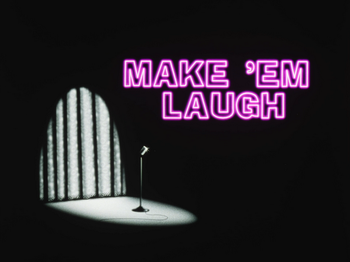 A man in an odd costume barges into a fancy restaurant, dousing several diners with ketchup and mustard guns and demanding that everyone hand over their money and valuables.
Advertisement:

Batman hears the police report about "a costumed extremist armed with a... ketchup gun" and moves in. He intercepts and easily defeats the robber, who calls himself the "Condiment King". Rejecting Batman's offer to go easy if he returns the loot and gives up crime, he ends up slipping on his own ketchup and falling on top of Montoya and Bullock's police car. They identify him as comedian Buddy Standler and take him to the hospital. Batman and Robin try to figure out a cause for his bizarre behavior, but are at a loss.

The next day, Alfred's shopping is interrupted by another strange new villain called the "Pack Rat," who steals only worthless junk but carries a very real submachine gun. Responding to Alfred's call, Batman and Robin subdue the Pack Rat. They discover that he is celebrity comedian Harry Loomis, and that he has a microchip on his neck.

The Dynamic Duo pay a visit to the Mad Hatter in Arkham Asylum. However, it's not his doing — he has also been tagged with a microchip, which has put him into a prolonged sleep.

Returning to the Batcave, they hear from Alfred that a third comedian, Lisa Lorraine, is missing. The three were to be the judges at an imminent "Laugh-Off" competition. Following up on this clue, they note an oddity in last year's competition. Someone calling himself "Smilin' Shecky Rimshot" tried to crash the stage, but was ejected for not being a registered contestant. As he was dragged offstage, he vowed vengeance. Upon taking a closer look at the intruder, Batman recognizes him as the Joker in disguise.

That night, the Joker shows up at the competition again, putting his goons in the vacant judges' chairs and taking the stage as the sole contestant. His plan to "win" the contest is thwarted by Batman, who chases him down while Robin confronts "Mighty Mom" (a mind-controlled Lisa Lorraine).

The fight ends with Joker rescued from a fall by Batman's grapple gun, the trophy stuck on his head and his pants around his ankles. This gets the Joker some genuine laughs for once, much to his dismay.