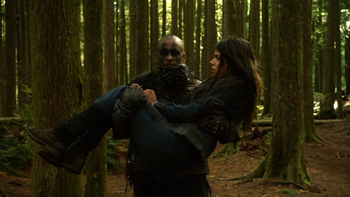 Octavia, meet Lincoln.
In a flashback to 17 years ago, a young Bellamy is watching his mother, Aurora Blake, give birth in secret because on the Ark, no one is allowed to have more than one child. Aurora lets Bellamy name his new sister and he calls her Octavia after the Roman emperor Augustus' sister. His mother tells him, "your sister, your responsibility." He promises her he won't let anything bad happen to her.

In present time, Bellamy is looking for Octavia because he can't find her in the camp. Clarke offers to help search.

Octavia awakens to find herself injured and alone in a cave. A Grounder enters, carrying a heated blade. He pins her down and cauterizes her leg wound, causing her to pass out again.

Bellamy gathers a search party of Delinquents to help look for Octavia and asks for Finn specifically because they need a tracker. Raven is busy giving Finn a haircut and they kiss. Finn and Clarke talk as a meteor shower appears overhead. It is actually the bodies of the 320 Ark citizens who were culled being returned to earth. Raven tells Bellamy it's all his fault for taking the radio. Bellamy brushes her off, saying he needs to find his sister and the search party leaves. Clarke and Raven stay behind to go to the bunker to see if they can find a transmitter for the radio.

Octavia awakens again, alone in the cave. She realizes the Grounder had fixed her knee and she begins to look around the cave, trying to find a way out.

Bellamy, Jasper, and Finn find the location where Octavia fell down a hill and discover footprints leading away that they begin to follow.

Octavia discovers some loose rocks and begins to pry them out, exposing a very tight opening out of the cave.

Bellamy and the search party come across several impaled corpses, symbolizing they've reached Grounder territory. Half of the delinquents head back to camp, but Bellamy and several others continue forward.

In another flashback, Bellamy is playing with a young Octavia in their room on the Ark while their mother sews. An alarm goes off, signaling that it's time for their "surprise" inspection. Octavia is forced to crawl into a space under the floor and hide while their room is inspected. Aurora is sleeping with Inspector Grus to not only keep ahead of the surprise inspections but to also hopefully get Bellamy a position on the Ark Guard. Under the floorboards, Octavia repeats to herself, "I am not afraid."

As Octavia crawls through the narrow cave opening she discovered, she repeats to herself, "I am not afraid," before finally squeezing her way out into daylight.

Clarke and Raven are headed to the bunker as they discuss their mothers. Raven tells her that it was because of Finn that she survived on the Ark.

Finn loses Octavia's trail while they're deep in Grounder territory. Roma asks where John Mbege went just before his body is dropped from the trees above. Jasper and Diggs spot Grounders and Finn tells everyone to run.

Clarke and Raven are digging through the supplies in the bunker when they find part of a remote control car that will work for their radio transmitter. Raven finds the metal two-headed deer trinket that Finn had made for Clarke.

Meanwhile, Bellamy and the rest of the search party are still running through the woods when Bellamy stops some of them. Diggs keeps running and triggers a tripwire, impaling himself on a Grounder trap. Roma sees this and panics. She takes off again with the Grounders following after her.

Octavia is running through the forest when she hears Roma scream. As she pauses, she is grabbed from behind and a hand covers her mouth and holds her still and quiet while Roma runs by. Suddenly, Roma is speared to a tree right where Octavia had been standing and she realizes the Grounder just saved her life.

In another flashback to the year before, Octavia is sewing alone in their room when Bellamy enters carrying a mask. He tells her that he got Cadet duty for the Unity Day Masquerade Dance and he'll be able to keep an eye on her. He leads her for the first time out of their room and Octavia is finally able to see the Ark and Earth. Bellamy shows her a moonrise and she is in awe. Other kids start arriving for the dance and Bellamy sends her off to enjoy herself, keeping a close eye on her the entire time.

Octavia is following behind the Grounder when she stops because of her leg. The Grounder turns around and picks her up and carries her. She thanks him for saving her life and tells him that if Roma was there, then her brother is also there and she asks him to save Bellamy. The Grounder doesn't respond, making Octavia think he doesn't understand. Once they get back to their cave, the Grounder chains her up so she can't escape again and leaves.

Bellamy, Finn, Jasper, and Monroe find Roma's body and realize the Grounders are playing with them. Jasper gets overly upset and begins screaming at the Grounders who start to close in on them. Suddenly, the Acid Fog horn is heard and the Grounders take off while the Delinquents hide under a tent.

In a flashback to the Unity Day Celebration, the dance is interrupted by a solar flare alert. Bellamy tells Octavia to run home and hide under the floor like always and he takes out his shock baton to create a distraction. Octavia admits to him that she doesn't know how to get home. Commander Shumway notices Bellamy has his weapon out and begins to question him. Octavia tries to run but is easily captured. Octavia looks to her brother in panic and a single tear falls down Bellamy's face.

While hiding under the tent, Bellamy gets impatient and realizes there is no Acid Fog. He spots a Grounder heading away from them and they follow after him.

Back at the camp, Raven confronts Clarke about the two-headed deer. Clarke tells Raven that she didn't even know Raven existed. Raven asks Clarke if she loves Finn and Clarke replies that she hardly knows him.

The Grounder returns to the cave to unlock Octavia. Octavia, however, is not happy about being chained up so she knocks him out first. She gets the key from his hand and is trying to unlock the chains when Bellamy arrives and they hug.

In a flashback on the Ark, Bellamy has been reduced to a janitor, his mother was floated, and Octavia was locked away. Commander Shumway comes to visit him and tells him that Octavia is being sent to Earth with the other Delinquents. If Bellamy wants a seat on the drop ship, he has to kill the Chancellor.

Bellamy wants to kill the Grounder but Octavia tells him they need to leave. Finn sees the Grounder's foghorn and realizes the Grounder had blown it to save their lives. The Grounder thinks they're trying to kill him so he stabs Finn and attacks Bellamy, pinning Bellamy to the ground. Octavia begs him not to kill her brother before Jasper knocks the Grounder out.

Bellamy carries an injured Finn back to camp, calling for Clarke to save his life. Clarke tells Raven to fix the radio because she needs her mother's help to save Finn's life. Octavia tries to leave camp again but Bellamy stops her. They get into a heated argument and Octavia storms off back to the dropship just as Bellamy remarks that there's a storm coming.