I Am Become Death 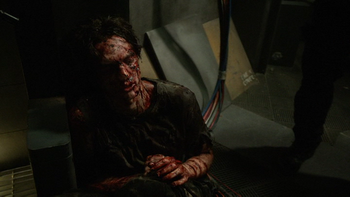 Murphy returns. Worse for wear.
"I know you."
—Clarke to Finn
Clarke, Bellamy, and a group of Delinquents investigate the Exodus dropship crash. There are no survivors. Raven tells Finn to help her find the black box to explain why the ship crashed. Bellamy warns everyone to keep on the lookout for Grounders in retaliation for the Unity Day bridge battle. Clarke discovers a pink, smelly liquid that Raven tells her to get away from because it is highly explosive hydrazine. She demonstrates by throwing some and creating a small explosion and tells Bellamy to clear the area.

Back at camp, Octavia joins Monty at a lookout spot on the fence and she spots a white flower outside camp walls, Lincoln's signal for her. Jasper is behind them, regaling some of the other Delinquents with his story about how he killed two Grounders at the bridge meeting. Octavia is irritated by it and Monty tells her to let them enjoy it. Something hits the tripwire surrounding the camp and Octavia worries it might have been Lincoln. Derek sees something move and starts shooting at it. He and Connor then go to check what it is with Octavia getting there first because she thinks it's Lincoln. It turns out that a badly beaten and tortured John Murphy has returned to their camp after having been banished by Clarke and Bellamy.

Murphy is brought into the drop ship and Bellamy comes looking for him when he returns to camp. He orders everyone but Connor and Derek out of the drop ship. Murphy tells them he was running from the Grounders. Bellamy starts to point a gun at him for returning and Finn intervenes, telling Bellamy that Murphy might be able to tell them things about the Grounders. Bellamy tells Finn to get out of his way but Clarke tells him Finn is right. She sees that Murphy's fingernails were torn off and that he was tortured. Bellamy wants to know what Murphy told the Grounders and Murphy admits, "everything." Clarke tells Bellamy to let Murphy get better and then force him to leave again and if he doesn't, then they kill him.

Harper enters Jasper and Monty's tent and hints at Jasper that she wouldn't mind coming by after his shift but he brushes her off, telling her he's busy. Monty asks why Jasper turned her down and Jasper calls her "low hanging fruit." Monty warns Jasper that Octavia isn't going to happen, especially after he killed two Grounders. Jasper tells Monty he's jealous and should find somewhere else to sleep.

Clarke heads to the Communications tent and runs into Raven inside. Raven tells her she still hasn't been able to get back in contact with the Ark since the Unity Day Celebration and she has a bad feeling. As she's telling Clarke she's sorry about her mom, Clarke begins to cry blood. Connor then calls out for Clarke because he's coughing up blood. As more delinquents begin coughing and bleeding, Clarke tells Raven to stay away.

In the drop ship, Murphy is puking up blood. Clarke asks him how he escaped and he tells her they forgot to lock his cage so he took off. Clarke realizes the Grounders purposefully let him go just as Bellamy enters the drop ship, asking what is happening. Clarke tells him it's biological warfare. Bellamy blames Murphy but Murphy tells them he didn't know. Derek starts seizing before collapsing and dying. Clarke orders a quarantine. She asks Connor who else was with them and Connor admits it was Octavia. Bellamy goes to check on Octavia and catches her reading Lincoln's journal. He brings her to Clarke and Clarke tells Bellamy that she needs to quarantine her. Once Bellamy leaves, Clarke tells Octavia that she needs to talk to Lincoln to get the cure. When Octavia arrives at Lincoln's cave, he is happy to see that she is unaffected, calling her strong. He tells her there is no cure but the sickness is used to weaken. He then tells her that the Grounders will attack at dawn and asks her to come with him as he is leaving to another clan. His people think he's a traitor because of Octavia. Octavia decides to go with him, but first, she needs to warn her people of the impending attack.

Another delinquent dies from the sickness and Bellamy orders everyone back to work. He checks in with Clarke at the drop ship to see if she needs anything and she jokes about needing some medicine. Bellamy then calls into the drop ship after Octavia and Clarke has to admit that she sent Octavia to Lincoln for a cure. Bellamy storms off and tells a delinquent to get out of his way. The delinquent turns and his eyes are bleeding. Everyone starts to panic as more kids fall sick. Clarke fires a gun into the air to get everyone to settle down. One delinquent orders Clarke back in the drop ship and Bellamy knocks him in the face before telling Clarke that her quarantine isn't working. Clarke starts to collapse and Finn rushes over to catch her. Octavia arrives just then with the announcement that there is no cure and the Grounders attack at dawn. Octavia then helps Finn get Clarke into the drop ship. Murphy stands up and offers his spot because he's already starting to feel better. Octavia offers Clarke some water and Clarke asks her to help with the sick and Murphy volunteers to help as well. Clarke then tells Finn to flee camp with anyone healthy enough to go with him.

Bellamy is working with Harper, Jasper, Raven, and Monty on getting the guns ready in time. Finn comes in and asks if Raven can blow up a bridge to delay the attack because Murphy mentioned he crossed a bridge to get back to the camp. Raven tells them the bridge won't survive her and goes and gets the liquid hydrazine from the drop ship explosion. She then builds a three-part bomb: gunpowder, hydrazine, and ignition (gunshot). Bellamy volunteers to make the 200-foot shot and asks which one will plant the bomb. Neither Raven nor Finn volunteer readily but then Finn finally says he'll do it. Bellamy asks him why he's not willing to pick up a gun but he is willing to blow up a bridge. Finn defends himself, saying that no one dies if he blows up a bridge. Bellamy remarks that the makers of the A-bomb also sought peace. Raven suddenly notices Bellamy's nose is bleeding. Finn asks who else can take a shot. Bellamy stumbles out of the tent and calls Jasper over. He tells Jasper that he needs him to take the shot and Jasper agrees and asks if it's because he's the only one who isn't sick. Bellamy tells him not to miss just before collapsing. Jasper orders two delinquents to get Bellamy into the drop ship.

In the drop ship, Octavia and Murphy are tending to the sick. Connor starts coughing severely and Octavia tells Murphy to get Connor onto his side. Connor asks Murphy why is he helping him after Connor tried to hang him and Murphy tells him, "bygones." Bellamy is then brought into the drop ship and Octavia rushes to his side. He tells her he's scared and she tells him she won't let anything happen to him, the same promise that he made her when she was born.

Finn and Jasper enter the tent where the bomb is and discover from Monty that Raven left with the bomb a while ago. Finn takes off after her and Jasper asks Monty if he wants to come. Monty declines as Finn calls for Jasper to come. Meanwhile, Raven is her way to the bridge when she trips and falls. She checks and the bomb is still safe, however, her nose has started bleeding.

In the drop ship, Bellamy wakes up, looking for Octavia and Clarke. Murphy approaches him with some water and Bellamy pushes him away. Clarke comes over and gives Bellamy some water. He asks where Octavia is and she tells him she was up all night tending to the sick. Bellamy tells her he thinks they should get everyone inside the drop ship and lock them up because sick is better than dead by the Grounders if Finn and Jasper don't pull it off.

Raven arrives at the bridge and is having great difficulty functioning because of the sickness overtaking her. Finn and Jasper are running through the woods, toward her and the war drums. When they arrive at the bridge, Finn realizes she's still building the bomb. He tells Jasper to line up the shot and then runs to Raven to get her to safety. The Grounder army begins to cross the bridge as Jasper shoots toward the bomb. He misses several times but it causes the Grounders to back up a bit. He realizes he is out of bullets just as Monty arrives with a new gun, loaded with 3 rounds. Jasper misses the first shot and makes the second, blowing the bridge in a massive explosion seen all the way back at the drop ship. Bellamy is impressed they did it and Clarke quotes Oppenheimer.

Back at Lincoln's cave, Octavia arrives and explains the bridge bombing was to stop the attack. Lincoln tells her she doesn't understand because the Mountain Men will come and kill them all. He tells her they have a lot of ground to cover before dark but she tells him she can't go with him because she's decided to stay and help her people. She returns his journal and kisses him on the cheek in goodbye.

Back at the drop ship, Jasper and Monty return to cheers and applause. Finn drags Raven in and Clarke gets her set up in the drop ship. Clarke leaves Finn with Raven and nods at Murphy in thanks for his help. Raven tells Finn that he doesn't love her the way she wants to be loved and returns the bird necklace he made her and breaks up with him.

Bellamy finds Clarke outside the wall at the graveyard and Clarke comments how there are 14 graves. Clarke tells Bellamy that Murphy was right about the bridge and Bellamy warns her about the so-called "Mountain Men."

Inside the drop ship, Murphy checks on Raven and sees that she is asleep. He gets a wet rag and walks over to Connor, placing it over his mouth and nose. He holds Connor down and suffocates him while saying, "bygones." After Connor dies, Murphy walks away and tosses the rag down.