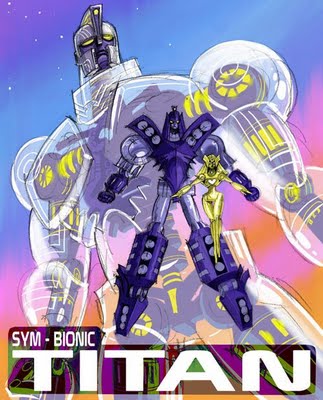 The Heart, Body, and Mind unite as one.

Sym-Bionic Titan is a Giant Robot Animated Series produced by Genndy Tartakovsky in 2010. It is about two aliens and one robot (Princess Ilana, Corporal Lance, and Octus) who hide on Earth from their enemies and must adapt to normal life while battling alien monsters with their Combining Mecha.

The heroes arrive on Earth, assume human identities, and discover how to create the Titan.

The heroes buy a house, but must hide their identities from nosy neighbors.

When Ilana and Lance have a major argument, Octus tries using advice from a children's TV show to get them to make up.

Lance becomes a crimefighting vigilante to let off stress.

Episode 5: Roar of the White Dragon

Lance gets into a rivalry with a criminal race car driver.

A creature attacks the heroes with illusions of their worst fears.

A beast tracks the heroes to their high school.

Whole-episode flashback to Lance's days at a military academy.

The heroes adopt a cute alien creature with a terrible secret.

Octus tries to help a cheerleader study and she gets a crush on him.

Episode 11: The Fortress of Deception

Lance and Ilana find themselves as prisoners at the mercy of the Galactic Guardian Group, and Octus must find a way to save them.

Episode 12: The Ballad of Scary Mary

Lance and Ilana accompany Newton and Kimmy to a "Scary Mary" party, where a Chameleon monster disguises itself as a student.

Episode 13: The Demon Within

After encountering another monster at a swamp, Ilana is transformed into a creature under its control.

All of humanity, Lance, and Ilana are seemingly frozen in time, leaving Octus to save the day.

General Steel sends a spy to Sherman High in order to find the Titan trio while Lance joins a local band.

Whole-episode flashback to the day Galaluna was invaded, with Lance and Ilana forced to survive waves of Mutraddi.

Episode 17: Under the Three Moons

Ilana feels homesick, so she joins the homecoming committee and bases it on the Galalunan Harvest Festival. Meanwhile, because Newton keeps secrets from her, Kimmy breaks off with him.

Episode 18: A Crisis in the Family

The trio head into space after receiving a distress signal from Solomon, who is trapped on a derelict space station with an energy-draining cloud.

As General Steel reveals a big new project to a Titan-deprived populace, Lance and Ilana look for a way to revive Octus.

Steel attacks the G3 HQ in an attempt to get to Lance and Ilana, but is forced to put his grudge aside when 3 Mutraddi arrive in the middle of his assault.