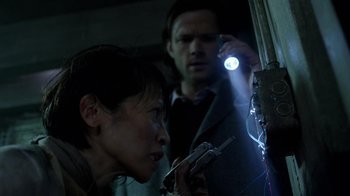 You will take me to my son. Flashlight. Flashlight!
Written by Robert Berens.

After receiving directions from an earthbound spirit, Sam and Dean search for Mrs. Tran. Meanwhile, Castiel is taken to meet with Bartholomew.